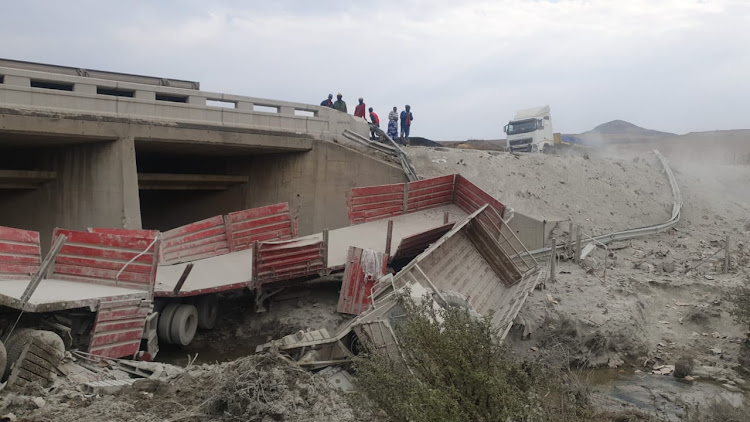 One person was killed and two injured when two trucks collided in Harrismith on Tuesday.
Image: Emer-G-Med

The truck collided with another heavy goods truck on the N3 freeway near Harrismith, in the Free State, at about 4pm.

Emer-G-Med spokesperson Kyle van Reenen said the vehicles “collided at high impact”. The trucks both left the roadway and came to a rest on an embankment.

“The driver and passenger in one vehicle were treated and stabilised at the scene before being taken to a nearby hospital.

“The driver and only occupant in the second vehicle was found to have sustained fatal injuries and was declared dead by paramedics,” he said.

The cause of the accident was being investigated by authorities at the scene.

SANDF spokesperson Brig-Gen Mafi Mgobozi confirmed to TimesLIVE that their truck was involved in the accident, and that two of its members were injured. He said he wasn't able to confirm the death of the driver of the other truck.

Three children among 28 killed in bus crash in Eastern Cape

Three children, 20 women and five men including the driver were killed after a horror bus accident on the N2 between East London and Butterworth on ...
News
2 months ago

Nine people were in a bus when it overturned on Friday, killing two school pupils at Mantlaneni location in Ntabankulu.
News
2 months ago

Four people have died and 10 others sustained injuries after a head-on collision involving a bus and a minibus taxi on the N1 outside Musina, ...
News
2 months ago