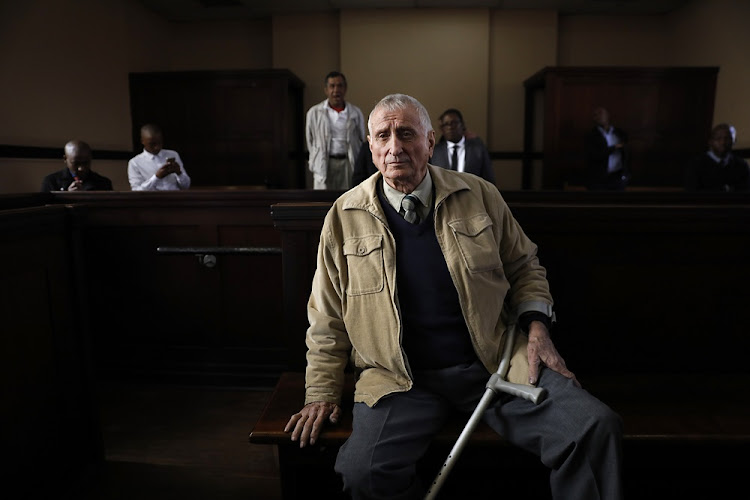 Joao Rodrigues, the apartheid-era police officer charged with the murder of activist Ahmed Timol, at his first court appearance on July 30 2018. He died on Monday. File photo.
Image: ALON SKUY

Joao Rodrigues, the apartheid-era security police officer charged with the murder of activist Ahmed Timol in 1971, died at his home on Monday night, his attorney confirmed on Tuesday.

“He died last night. He had health issues. He was 82 years old. He was no longer a young man,” said attorney Ben Minnaar.

He said Rodrigues had spent time in hospital.

“Unfortunately he took a turn for the worse. He was discharged from hospital and was recuperating at home.”

Minnaar said as a result of Rodrigues’ death, the criminal case cannot proceed.

“There is a Constitutional Court matter that will possibly proceed,” Minnaar said.

He was referring to an application Rodrigues made to the Constitutional Court in July.

Joao Rodrigues, the former Security Branch clerk charged with the murder of activist Ahmed Timol in 1971, has approached the Constitutional Court in ...
News
11 months ago

Timol died as a result of injuries sustained when he fell from the 10th floor of the offices of the Security Branch at Johannesburg's John Vorster Square police station on October 27 1971.

An inquest held in 1972 concluded Timol had committed suicide. However, the inquest into his death was reopened in 2017 and judge Billy Mothle ruled in October 2018 that Timol was killed.

The reopened inquest also found Rodrigues, in his own version, participated in the cover-up to conceal the crime of murder as an accessory after the fact of the murder.

The inquest said Rodrigues went on to commit perjury by presenting contradictory evidence before the 1972 and 2017 inquests.

Mothle recommended Rodrigues be investigated for those offences.

The National Prosecuting Authority (NPA) and the Hawks say they have adopted a strategy to create dedicated and sustainable capacity to investigate ...
News
11 months ago

After the reopened inquest, the National Prosecuting Authority charged Rodrigues with premeditated murder in 2018.

However, Rodrigues sought a permanent stay from prosecution, arguing, among others, that the prosecution instituted 47 years after the alleged unlawful conduct infringed on his right to a fair trial.

Reacting to his death, Timol’s nephew Imtiaz Cajee said that is why, following the reopened inquest, he had been aggressively fighting for Timol to have his day in court.

“It is very evident that he and his legal team have outmaneuvered the legal system. He had 19 court appearances and his 20th court appearance was scheduled for September 30,” Cajee said.

He said Rodrigues failed in his bid for a permanent stay of prosecution in the high court and the Supreme Court of Appeal.

He said the question must be asked regarding whose interests government was serving: apartheid era victims or perpetrators.

The Supreme Court of Appeal on Monday dismissed an appeal by Joao Rodrigues arguing that criminal proceedings against him over the murder of activist ...
News
1 year ago

The state attorney should refuse to pay more legal costs for Joao Rodrigues, the former security branch officer implicated in the murder of ...
News
2 years ago

The legal team of Joao Rodrigues, the retired Security Branch administrative clerk charged with the murder of anti-apartheid activist Ahmed Timol in ...
News
2 years ago