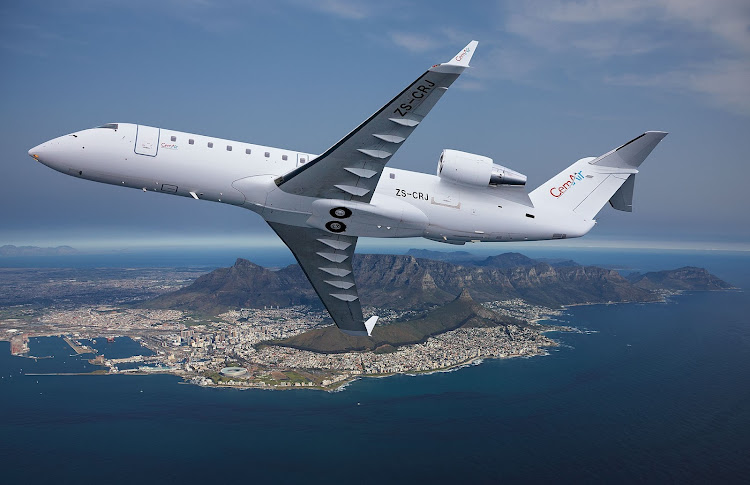 A CemAir Bombardier jet similar to the one that took off from George Airport as an Airlink plane prepared to land.
Image: CemAir

An investigation is under way after two planes carrying a total of 72 people narrowly avoided a potential disaster at George airport in the southern Cape.

The planes were landing and taking off in opposite directions on the airport's single runway when an approach controller detected the danger and ordered the arriving aircraft to stop its descent and make a sharp turn.

A CemAir Bombardier jet carrying 38 passengers and three crew to Johannesburg took off at 5.47am under a protocol used when the tower is unmanned.

This was despite the tower having broadcast three messages by that time saying it had opened two minutes earlier.

Thirteen seconds after the CemAir pilot said he was about to take off, an approach controller ordered an Airlink Embraer jet approaching the airport from Cape Town carrying 28 passengers and three crew to make a sharp right turn so it could avoid the Bombardier. 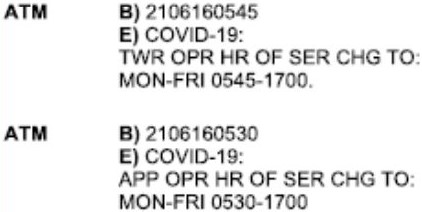 A notice to airmen and women (Notam) issued on June 16 and citing Covid-19 as the reason said approach control would open at 5.30am from Monday to Friday but the tower would open only at 5.45am.

The 15-minute difference in starting times was eliminated on Monday - three days before the CAA report said it made no sense - in a new Notam.

It said a “tower operating hours of service modification” meant air traffic control would be available from 5.30am to 5pm, Monday to Friday.

The report said: “It is recommended in the interest of aviation safety that the tower and approach control stations at FAGG [George airport] open at the same time.

“The rationale as to why the two stations opened at different times could not be determined with certainty but posed a serious safety implication on the operations at the aerodrome, which resulted in this serious incident.”

The serious incident report suggested this would eliminate a daily issue involving the Cemair and Airlink flights involved in the August 23 drama on the 2,000m runway which is numbered 11 in one direction and 29 in the other.

“The aerodrome departure schedule indicated that flight KEM125 (the Cemair flight to Johannesburg) departs FAGG at 5.45am from Monday to Friday, and Link621 [the Airlink flight) departs [Cape Town] at 5.15am and arrives at [George] any time between 5.45am and 6am.”

Despite this, said the report, approach control and air traffic controllers started work at different times for several months.

"[The CemAir flight crew] was well aware of the [June 16] Notam but did not wait for the tower to open even after they were informed by approach control of the situation with Link621,” the report said. 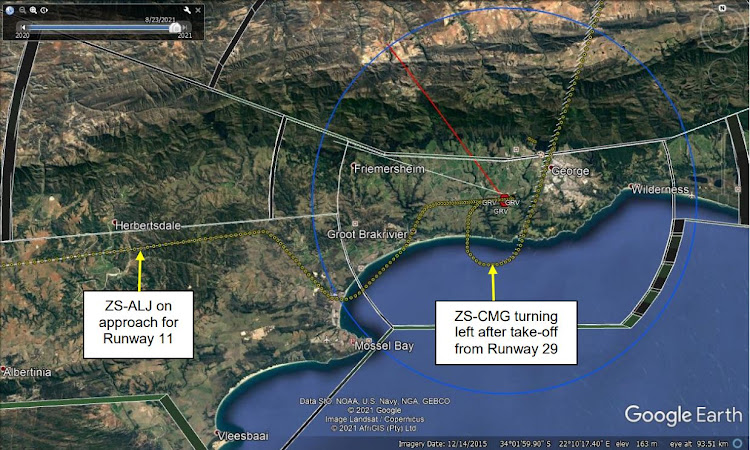 The flight paths of the two aircraft - one landing, the other taking off - that were involved in a serious incident at George Airport on August 23 2021.
Image: SA Civil Aviation Authority

It quotes exchanges between approach controllers and the two pilots in the minutes before the serious incident:

5.41:28 KEM125 first officer broadcasts on the tower frequency that the plane is taxiing prior to take-off.

5.42:09 Approach control informs KEM125 the tower frequency will be opening within two minutes and an inbound aircraft will be using the runway in the next seven minutes.

5.42:22 KEM125 requests permission to use the runway and is told to remain at its holding point.

5.43:58 Approach control tells KEM125 it cannot accommodate the request because the tower is still closed.

5.44:02 KEM125 pilot tells approach control he will be using the unmanned departure procedure and turning out over the sea.

5.44:23 KEM125 broadcasts on the approach frequency: “George traffic [KEM125] is lining up [on the runway], we are taking off, it will be an early left-hand turn out climbing overhead the airfield initially to [10,000ft].”

5.44:58 Tower advises all traffic it is open, and repeats its message 13 seconds later. 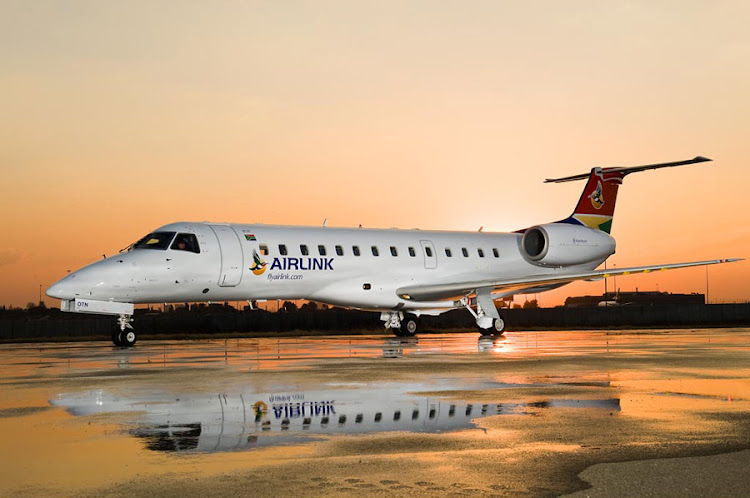 An Airlink Embraer jet similar to the one involved in the incident at George Airport on August 23 2021.
Image: Airlink

5.45:21 Link621 tells approach control it has the runway in sight for visual approach. The controller replies: “Link621, I might have to level you off I am just waiting to see where KEM125 turns, he is lined up at the moment.”

5.45:39 Tower asks any traffic on its frequency to acknowledge.

As Magda Rorich, seriously injured and surrounded by crocodiles, clung to the semisubmerged rotor blade of a helicopter that had plunged into the ...
News
1 year ago

Stewart Lithgow flew everything from military aircraft and jumbo jets to aerobatic biplanes, and in 25,000 hours at the controls he never had an ...
News
1 year ago

Helicopter pilot Stewart Graham was "living the dream in SA" and had been engaged for only four months when he took off on his final flight.
News
1 year ago