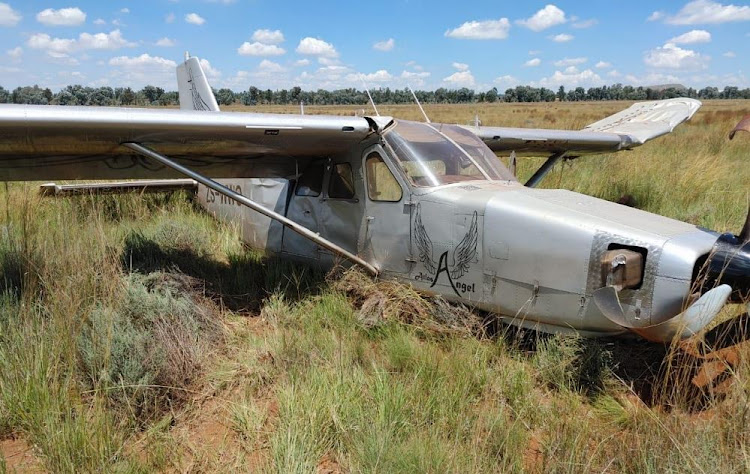 The Kudu C4M Angel parachuting aircraft that crashed at Carletonville Aerodrome in Johannesburg, injuring all eight people on board, on February 12 2021.
Image: SA Civil Aviation Authority

Six parachutists and the co-pilot were knocked unconscious but survived when their plane crashed at Carletonville Aerodrome, home of the Johannesburg Skydiving Club.

The 56-year-old pilot also survived the February crash that wrote off the ex-military aircraft, only to be criticised this week in a SA Civil Aviation Authority report.

Issuing the findings of its limited accident investigation, the regulator said: “The pilot in charge had, during the climb phase at about 250ft above ground level, prematurely retracted the flaps and the aircraft entered a sink mode due to loss of lift.”

The error was them compounded by the co-pilot, described in the report as the safety pilot, who took over the controls then “panicked and confused the sink mode (feeling) with the loss of thrust”, said the report.

“In response, he pulled back the throttle lever, which exacerbated the situation. To recover the engine power, the safety pilot hastily opened the throttle, and this resulted in the compressor stalling the engine.”

The aircraft, a Kudu C4M Angel that survived the Angolan conflict with the then SA Defence Force, was written off in the next few seconds.

An investigation is under way after two planes carrying a total of 72 people narrowly avoided a potential disaster at George airport in the southern ...
News
4 months ago

“The aircraft spun around clockwise and came to rest facing the direction of its approach. [It] sustained substantial damage.”

One of the skydivers said the plane was about 250ft above the ground when he heard the engine reducing to idle power and saw the throttle lever in the idle position.

“He then saw the safety pilot engage the isolator switch and, thereafter, he heard the engine spooling up from the input of the fuel condition lever,” said the report.

“At this point, he realised that they were going to crash. He asked one of the skydivers to open the door but before the door was opened the aircraft crashed and knocked all skydivers unconscious.”

All eight occupants of the plane were taken to hospital.

“The investigation established that the actions of both pilots resulted in induced drag and loss of power [and] increased the rate of descent or sinking rate, which resulted in a crash,” said the report.

The investigators recommended a review of the CAA's oversight programme relating to parachuting operations.

The regulator's limited reports are compiled without detailed investigations and are intended to alert the aviation industry to potential safety issues rather than to apportion blame.

“This report provides an opportunity to share safety message/s in the absence of an investigation,” it concludes.

The destroyed plane was one of more than 40 built in SA and used by the SA Air Force between 1974 and 1991 before being sold for private use and fitted with a more powerful engine.

Investigation into 'midair collision' that claimed life of parachutist

A skydiver was killed and another injured when they collided in midair in Mpumalanga on Sunday.
News
4 months ago

As Magda Rorich, seriously injured and surrounded by crocodiles, clung to the semisubmerged rotor blade of a helicopter that had plunged into the ...
News
5 months ago

One of the pilots had broadcast a mayday message, which was heard by two other aircraft.
News
8 months ago