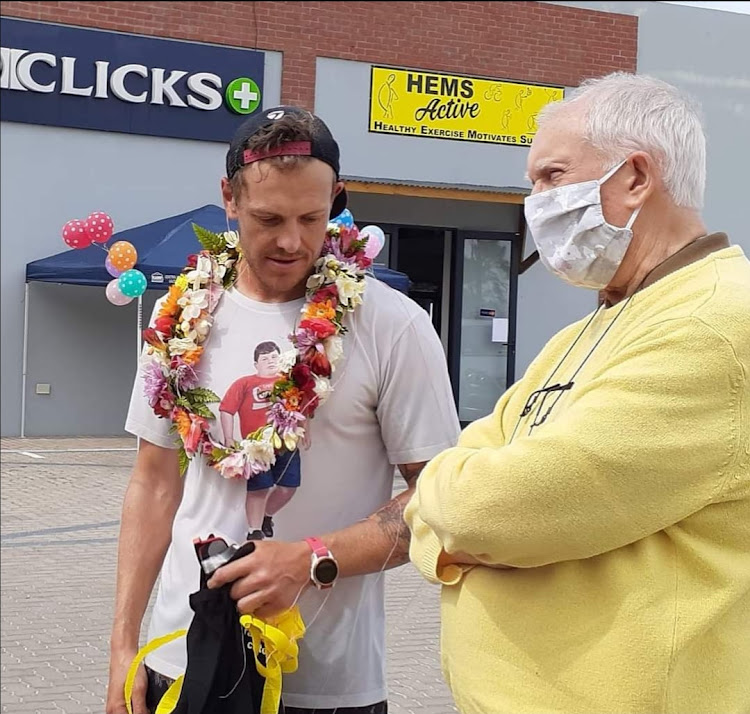 Henry Cock in Sedgefield in the Western Cape after breaking the record on Tuesday.
Image: via Facebook

Johannesburg businessman Henry Cock has smashed a Guinness World Record by running 76 half marathons in 76 days in an epic attempt to raise R4m for the SA Depression and Anxiety Group’s (Sadag) suicide helpline.

Cock, who has raised more than R700,000, broke the record in Sedgefield in the Western Cape on Tuesday.

On July 8, amid the Covid-19 pandemic and looting chaos, Cock set off from Kosi Bay in northern KwaZulu-Natal in an attempt to break the Guinness World Record for the most consecutive half marathons completed in a row while trying to raise funds for Sadag.

Cock, 34, trained for months for the challenge with his ultimate goal 133 consecutive half marathons over 133 days and covering a distance of 2,800km.

His epic attempt will end in Vioolsdrift in Namibia.

Cock, who admits he is not a professional athlete, has taken on this feat in an attempt to dismantle mental health stigma and be a beacon of hope for those who suffer in silence.

Having battled depression and anxiety in recent years due to the dissolution of a long- term relationship, the strain the ongoing pandemic has had on his businesses and daily personal struggles, Cock has his eyes fixed on completing this mammoth challenge.

He has been documenting his experience on social media platforms.

Cock said in a Facebook post: “So just a little less than a year ago I set out to reach this target. It seemed like a mad crazy target to reach.

“I’m only a small way to my goal, but this was the first big hurdle to overcome.”

He said while the official record was 75 days in a row, which he managed to beat, “it’s not the big goal for me”.

“The goal is to raise money for Sadag and raise the profile of mental health in SA. Each day I run, every radio interview I do or person I speak to, that is a bigger step towards the goal than anything else.”

Sadag founder Zane Wilson praised Cock for his achievement and for his “commitment to raising awareness about mental health” and raising funds for the organisation.

“We encourage everyone to send congratulatory messages on his Instagram, keep a lookout for Henry while he runs through your city, join Henry on his daily runs and keep donating to help him reach thousands of people in need through his Back-a-Buddy page,” said Wilson.

Run for your life: every step of man’s 2,800km quest is for SA mental health

A Johannesburg businessman is gearing up to break the Guinness World Record for the most consecutive half marathons completed in a row with the aim ...
Lifestyle
6 months ago