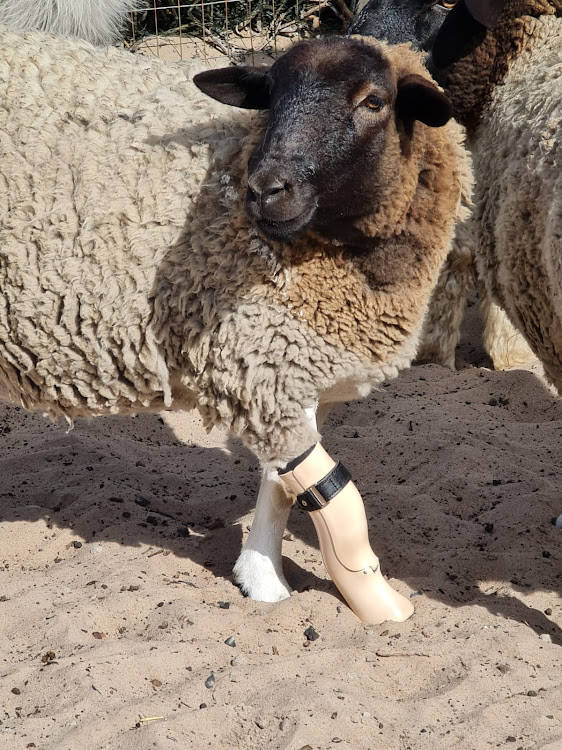 Dolly steps out with her new leg on Friday.
Image: Supplied

When a prosthetist from Cape Town was asked to “do” a leg of a lamb, it had nothing to do with food.

Instead, the company was asked to make a fake leg for an actual animal - something they had never done before. Nonetheless, they rose to the challenge.

Dolly the lamb was rescued and started living on a Melkbos farm when her front leg got trapped in a snare. She would ultimately lose the leg.

Gayl Basson, who is part of the team that takes care of Dolly, said they started asking for help on Facebook for a prosthetic leg as she was growing and her weight became too much for the damaged leg to handle.

“Her leg was amputated after the incident a few years ago. The farm she used to live on asked if we could take her in. She was still taking the bottle. We recently noticed that she was getting bigger and her leg couldn't support her any more. I put up a request on Facebook and a company responded saying they have never done one for an animal,” Basson said.

It all worked out, and the sheep got her leg on Friday. Her new leg was done and donated by Eugene Rossouw.

“They had to think out the box a bit as sheep are not their normal clients,” said Basson.

Dolly has already taken to her new appendage.

“It’s been two days. She’s a bit wobbly but is slowly walking well. It’s easy to look after her because she’s a pet and is tame. The prosthetic will be on during the day and off at night so we can keep an eye on her stump.

“She stands so nice and straight with it, and is walking, though I'm sure it feels terribly strange,” said Basson.

Family of 10 sleep in community hall after 'unlawful lockdown eviction'

A family evicted during the lockdown now faces eviction from the community hall where they sought shelter.
News
4 months ago

Tyre shredder to tender shepherd: Clarkson’s (almost) all grown up

Is the famous petrolhead’s new show just ‘Top Gear with animals’? I think it’s more than that
Lifestyle
3 months ago

New evidence from an ancient ostrich eggshell shows that between 250,000 and 350,000 years ago the Nama Karoo was a "Garden of Eden" covered in lush ...
News
4 months ago

Close to 7,000 people from around the world attended a virtual birthday party for Khanyisa, a rare albino baby elephant weighing 345kg.
News
2 months ago