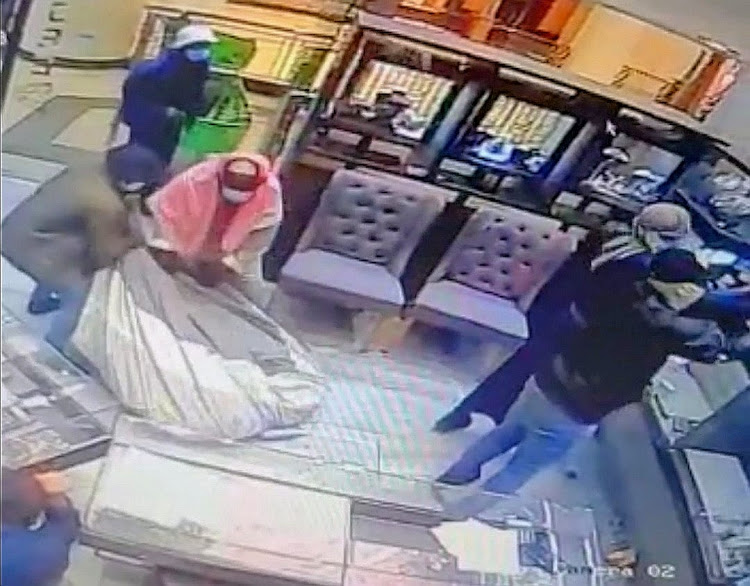 A security officer is fighting for his life after a jewellery heist at the Gateway Theatre of Shopping in Umhlanga, north of Durban, on Wednesday afternoon.

According to Prem Balram of Reaction Unit SA (Rusa), the security officer is in a critical condition after being shot in the parking lot after an armed robbery at Damjee Jewellers and NWJ.

“Rusa operations centre received multiple calls since 2.32pm from shoppers reporting the robbery in progress. Several frantic callers informed the controller on duty that at least 15 suspects had robbed Damjee Jewellers and NWJ.”

On security officer has been critically injured after a gang of armed men stormed Damjee Jewllers at the Gatweway Theatre of Shopping, north of Durban, shortly after 2pm this afternoon.#DurbanJewelleryHeist@TimesLIVE pic.twitter.com/R5wawaGOrf

Balram said the officer was stabilised by paramedics from a private ambulance service.

“According to shoppers, the gunmen fired multiple shots during the robbery. Several spent 9mm and rifle cartridges were recovered in the mall. The robbers are believed to have fled in a white Toyota Corolla and a white Mazda bakkie,” he said.

Shawn Herbst of Netcare 911 said the officer had been shot in the abdomen after trying to intervene in an armed robbery.

“According to witnesses, the store was ambushed by about 10 to 15 suspects, all armed. The patient was found to have sustained critical injuries and was treated on scene by a Netcare 911 emergency care practitioner. Once stabilised the patient was taken to a nearby hospital.”

CCTV footage of the incident shows several men entering the store before producing firearms as customers and employees duck for cover.

The men proceed to break through the glass covering a lot of jewellery and load it into what appears to be a bed sheet.

An attack in Pretoria by 30 AK47-wielding gunmen on a Fidelity Cash Management Services van has sparked fears that SA’s annual heist season has ...
News
10 months ago

A project to train artisans in diamond cutting has instead led to the arrests of four government officials in the Northern Cape.
News
10 months ago

Four arrested after robbery at jewellery store in Ekurhuleni

Four men were arrested after a robbery at a jewellery store at a mall in Ekurhuleni on Wednesday, police said.
News
11 months ago

One suspect was killed and a second injured during a gunfight when a gang targeted a cash-in-transit vehicle early on Thursday in Centurion.
News
1 year ago