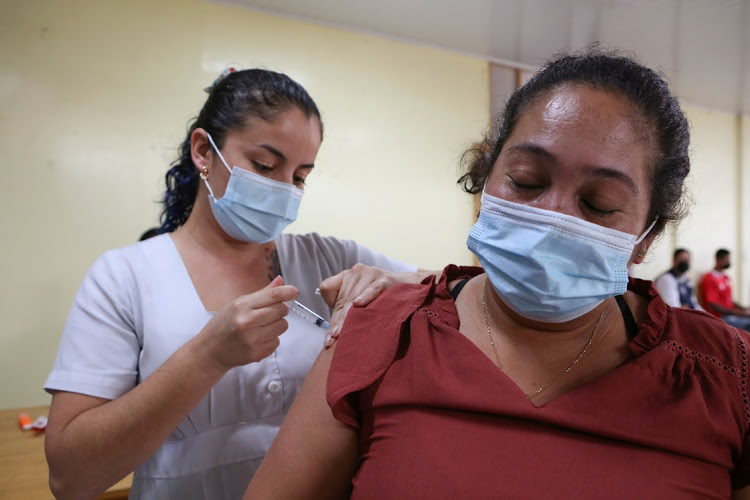 A Costa Rican healthcare worker administers a vaccine dose to a Nicaraguan migrant as part of a vaccination campaign against the coronavirus disease (Covid-19) targeting migrants regardless of their legal status, in Guadalupe, Costa Rica October 13, 2021.
Image: REUTERS/Mayela Lopez

SA recorded another day of fewer than 1,000 new Covid-19 cases, according to figures from the National Institute for Communicable Diseases on Thursday.

The NICD said that there were also 40 Covid-19 related deaths recorded in the past day, taking the total number of fatalities to 88,506 to date.

From the outside, First Harvest Ministries in Waveland, Mississippi, could almost be mistaken for a storage shed were it not for the steeple.

From the modest building however, Shane Vaughn, the Pentecostal church's pastor, has helped spearhead an online movement promoting personal faith as a way around workplace Covid-19 vaccine mandates.

He posts form letters for US workers seeking religious exemptions that have been downloaded from his website around 40,000 times, according to a screen shot of web traffic he shared with Reuters."

This is the only way out," said Vaughn, 48, of the letters, which he makes available for free, that mix Biblical scripture with warnings to employers of legal fallout if they are disregarded.

As the Biden administration prepares a federal vaccine mandate and more states and companies impose them to help accelerate the pandemic's end, letter-writing efforts by religious leaders are being reinforced by legal advocacy groups such as Liberty Counsel.

The organization said it has sent more than 100 letters to companies including United Airlines Holdings Inc and Tyson Foods Inc vowing litigation if they improperly reject religious exemption requests.

United spokeswoman Leslie Scott said the airline received the letter but it had no impact on the company's actions. Tyson did not comment on the letter.

United said about 2,000 of its 67,000 US employees have requested religious or medical exemptions.

Almost 390,000 voters will go to the polls this Sunday in #CapeVerde. One of the main issues at stake is the recovery of #tourism, a key sector that accounts for 25% of GDP. Last year, due to the #pandemic, the country lost three quarters of its visitors. The recession was historic. FRANCE 24's Sarah Sakho and William de Lesseux report from Tarrafal.

Want to change your phone number to make sure you get the R350 grant? Here’s how

The SA Security Agency (Sassa) has shared some tips on how to change your cellphone number on its database to make sure you get your R350 grant.

The agency has urged those wanting to collect their R350 grant through cardless banking at an ATM to Rica their cellphone number.

“If they choose to be paid through their bank accounts they must ensure the bank account provided is registered in their name. This will assist the client to withdraw their grant with ease from merchants as till pins are sent to cellphone numbers provided when applying,” it added.

Want to change your phone number to make sure you get the R350 grant? Here’s how

Consumer spending is recovering better than expected in most categories, as Covid-19 lockdown regulations have eased.

This is according to data from FNB, which says spending by individuals who hold debit, credit, and fusion cards with it has increased 19.2% year on year (y/y).

Britain's defences against Covid-19 are working and the pandemic situation is currently stable, health minister Sajid Javid said on Thursday."

Overall things feel quite stable at this point. The numbers are a bit up, a bit down over the last few weeks," he told Times Radio."

Our primary defences against this virus are working."

Co-operative governance and traditional affairs (Cogta) minister Nkosazana Dlamini-Zuma has extended the Covid-19 national state of disaster by a month.

In a statement, her department said the decision was taken after consultations with relevant stakeholders.

Sore throat, cough, fever? These are classic symptoms of a COVID-19 infection. If you develop these, or any other COVID-19 related symptoms whilst at school, tell your teacher. Click here if you think you've been exposed: https://t.co/tvIKEc4C2y #SchoolHealthAwarenessWeek pic.twitter.com/jYDMxI1rnL

What are 'Covid toes' and how do I know if I have them?

Are your toes swelling and turning red or a purplish colour? This could be a sign of a condition dubbed “Covid toes”.

A new study conducted by British Journal of Dermatology, found that some patients who test positive for the Covid-19 develop less common symptoms like discoloured and swollen toes.

The condition can show up on toes, fingers, or both.

What are 'Covid toes' and how do I know if I have them?

A total of 38,969 tests were conducted in the last 24hrs with 942 new cases, which represents a 2.4% positivity rate. A further 37 #COVID19 related deaths have been reported, bringing total fatalities to 88,466 to date.
Read more here: https://t.co/xyck4d216w pic.twitter.com/OOyFnBWYMc