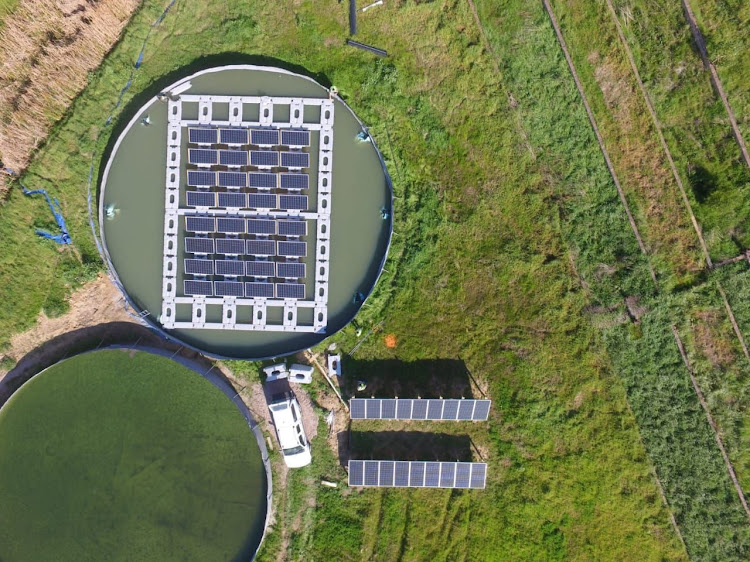 This floating solar farm at the Kraaifontein wastewater treatment facility will be a testbed for the future of South Africa's electricity generation.
Image: Luthando Tyhalibongo (City of Cape Town)

The city of Cape Town has installed a floating power generation system on one of its sewage dams to test the efficiency of such solar farms in stopping water from evaporating while generating clean energy.

The city became the first municipality in SA to own a floating power plant after the floating solar photovoltaic pilot system was opened at the Kraaifontein Wastewater Treatment Works on Wednesday. It will help the city determine evaporation savings and energy generation performance of floating solar farms.

The city hopes the project will help it pave the way towards a more sustainable city as it aims to achieve total renewable energy generation of 300MW through both city-owned and private power generation.

The city said on Wednesday that it wanted to own 50MW of renewable energy generation by 2030 and that it aims to be carbon neutral by 2050.

The floating solar farm is part of a research study involving Floating Solar (Pty) Ltd, the Water Research Commission and the University of Cape Town.

According to the city, data will be collected from sensors over a year to potentially inform the design of larger floating solar PV projects over the next few years through competitive bid processes.

Cape Town mayoral committee member for energy and climate change Phindile Maxiti said the 50MW of renewable power the city hopes to own by 2030 will consist of solar PV plants, some of which the city hopes to build on water bodies due to the prohibitively expensive price of land in the city, and to counter water loss in the drought- prone city.

“The city has been fighting to move away from its sole reliance on Eskom and to diversify the energy mix for cleaner and more affordable and secure power for all,” she said.

“Given that vacant land in the city is very expensive and rooftop solar PV systems are relatively small, Cape Town aims to explore floating solar PV systems for larger-scale solar PV installations as part of its pioneering work to diversify the energy mix, to lead by example and to take climate action leadership,” said Maxiti.

“Generating clean power and reducing evaporation rates of water bodies could be a great double win for sustainability. This type of project is a tangible example of how we can build a more sustainable future city and how the green economy can be harnessed for the sustainable, and inclusive, economic recovery we require especially after Covid-19,” she said.

“In following this trend, we have identified significant potential within SA for this promising technology which has the dual benefit of producing power while reducing evaporation and preserving land for other commercial use,” he  said.

“From the outset, we have identified more than 60 high-potential projects — with a combined capacity of more than 450MW — that will be well suited to benefit from Floating Solar development,” he said.

He said a key target market is about 1,000 water treatment works across SA’s municipalities which he said are well suited for floating solar due to the significant demand for on-site power requiring a sustainable energy source, limited available land and water evaporation savings, as well as providing the opportunity to export additional power to the grid.

“We are extremely pleased that Cape Town is enabling this pilot project to investigate this potential,” he said.

With the world facing a climate change crisis, President Cyril Ramaphosa says SA’s electricity sector will be the first and quickest to decarbonise – ...
Politics
7 months ago

Only huge political will can save the Amazon and, with it, the planet