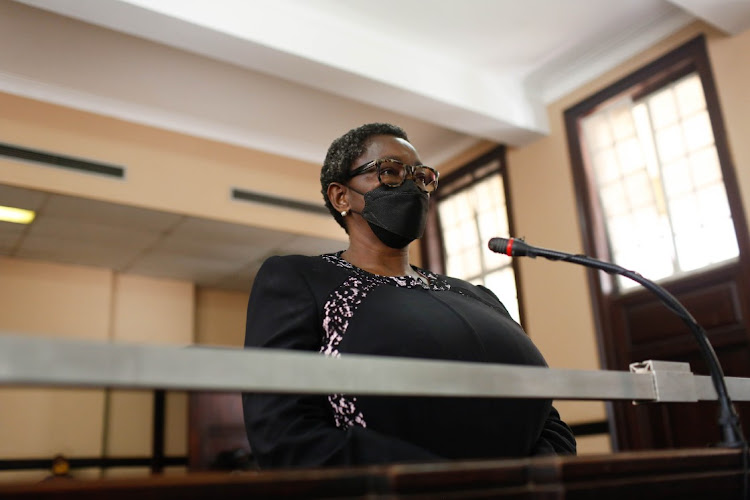 Former minister of social development Bathabile Dlamini in the dock at the Johannesburg magistrate's court, where she is facing perjury charges relating to her testimony during the inquiry into her role in the social grant crisis in 2017.
Image: Alaister Russell/TimesLIVE

Former social development minister Bathabile Dlamini has pleaded not guilty to a charge of perjury against her.

Clad in a black suit, Dlamini was accompanied by a handful of supporters wearing ANC regalia. She took the stand in the Johannesburg magistrate’s court on Wednesday when her trial started.

Dlamini, who also serves as president of the ANC Women’s League, allegedly gave false evidence under oath at an inquiry instituted by the Constitutional Court in 2018 into the payments fiasco at the SA Social Security Agency (Sassa), a claim she denied while entering her plea.

The National Prosecuting Authority is expected to call its first witness.

The matter relates to repeated extensions of an unlawful tender awarded to Cash Paymaster Services (CPS) to distribute the department’s social grants in 2017.

The court was forced to extend the contract with CPS even though it had been found to be illegal.

The inquiry, chaired by judge Bernard Ngoepe, found Dlamini concealed the extent of her involvement in the debacle and she was ordered to pay personal costs of about R650,000, which she settled in May.

The ConCourt ordered Ngoepe’s report to be forwarded to the national director of public prosecutions to consider whether Dlamini had lied under oath and should be prosecuted for perjury.

In September this year, the Gauteng director of public prosecutions, advocate Andrew Chauke, decided to prosecute.

Dlamini subsequently made her first appearance on September 21 and the matter was postponed to October 1 for disclosure of the contents of the docket to her legal team.

During her previous appearance, Dlamini’s attorney Tshepiso Mphahlane accused the state of targeting her client because she had been a politician.

The perjury case against former social development minister and ANC Women’s League president Bathabile Dlamini has been set down to proceed for plea ...
News
7 months ago

The Director of Public Prosecutions in Gauteng has taken a decision to prosecute former social development minister Bathabile Dlamini for her alleged ...
Politics
9 months ago

Sunday Times reported that Dlamini had owed R55,000 to the Black Sash and about R600,000 to Freedom Under Law.
News
1 year ago