Inquiry may recall former defence minister Nosiviwe Mapisa-Nqakula to answer the allegation that she lied in testimony to the Human Rights Commission. 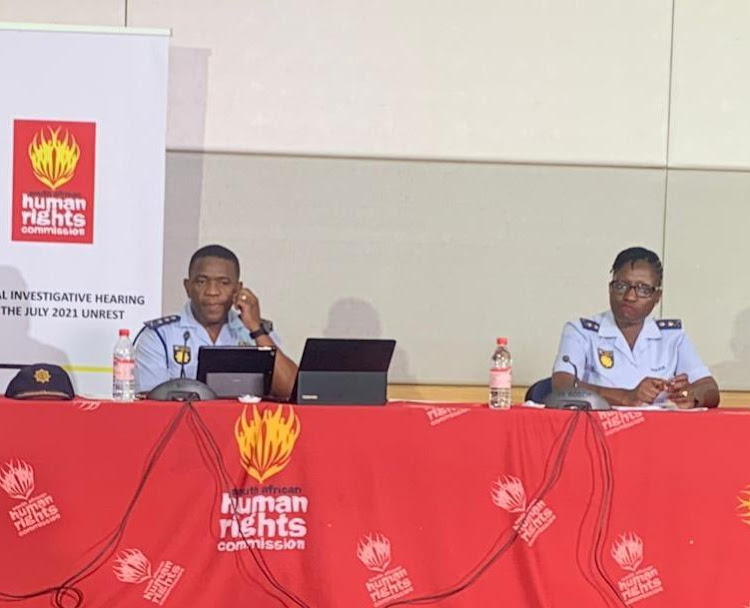 KZN police commissioner Lt-Gen Nhlanhla Mkhwanazi told the SAHRC that there was nothing in the SAPS performance assessments that could lead to action against provincial police management and station commanders for the deaths during the July uprising.
Image: SAHRC via Twitter

KwaZulu-Natal police commissioner Lt-Gen Nhlanhla Mkhwanazi called out former defence minister Nosiviwe Mapisa-Nqakula for a “lie” during a closed meeting when they met during the July unrest.

Mkhwanazi also accused Mapisa-Nqakula of lying to the SA Human Rights Commission when she testified that he was unco-operative and withheld information at a meeting and “spoke about a challenge” that had nothing to do with the riots.

Mapisa-Nqakula had testified that the meeting “digressed and was diverted into discussing other concerns that had nothing to do with what we were in KwaZulu-Natal about”.

She claimed that Mkhwazani had shown signs of disrespect to the ministers, who had arrived in the province to address the unrest.

On Wednesday, Mkhwanazi told the commission that Mapisa-Nqakula's testimony about him was a “blatant lie”.

He said that during the closed meeting on July 15, he told Mapisa-Nqakula that she should stop lying to the public that 800 soldiers had been deployed to the province.

When asked if Mapisa-Nqakula took aim at him because she was offended by this, Mkhwanazi said “it could be”. However, he noted that when she testified about his paternity leave, it seemed like she “was a lot more personal about me”.

He said that during Mapisa-Nqakula's testimony a week ago, he received phone calls from people wanting to know “what I had done to this minister”.

Mkhwanazi said he was watching the proceedings as he was expected to testify later that day.

“I switched on the TV and was a bit upset about what the former minister was saying about me, which was a blatant lie broadcast on TV,” he said.

Mkhwanazi said God was on his side when his scheduled appearance before the commission was postponed.

“It granted me an opportunity to give the real truth about what happened,” he said.

Earlier, Mkhwanazi took responsibility for the loss of lives in the province during the July unrest.

“I am taking responsibility for the failure of the police to protect lives and property as outlined in the constitution, regardless of whatever makes us underperform,” said Mkhwanazi.

However, Mkhwanazi told the SA Human Rights Commission that there was nothing in the police performance assessments that could lead to action against provincial police management and station commanders for the deaths.

When asked again why the station commander in Phoenix was not being held accountable for the murders of more than 30 people there, Mkhwanazi replied that he did not kill them.

“The police did not kill them. These were the people killed in instances, if not all, without the presence of the police. Why should the police be held accountable? The police don’t take responsibility for your husband, who killed you in your house, because the police failed to protect you,” said Mkhwanazi.

Mkhwanazi added that a lot of people would not have died if they had stayed home during the unrest. He explained that he did not condone murder, however most people killed in the province had died from being trampled to death while looting.

On Tuesday, he testified that police had recorded 218 bodies picked up throughout the province.

He said most had been trampled to death while looting. Some were killed by other looters over goods “such as a bottle of whisky”.

The police did not have any intelligence on the July unrest before widespread looting and riots hit Gauteng and KwaZulu-Natal, says national ...
News
1 month ago