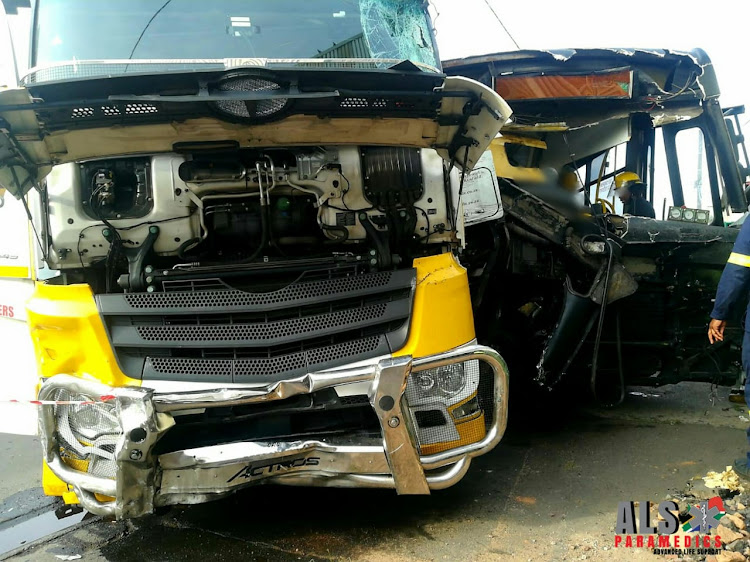 The bus and the truck involved in a crash in Jacobs on Wednesday afternoon. Four people were killed and 28 others were injured during the crash.
Image: ALS Paramedics

Four people were killed and 28 others injured when a bus and a truck crashed in Jacobs, south of Durban, on Wednesday afternoon.

KwaZulu-Natal emergency medical services spokesperson Robert McKenzie said paramedics and emergency services were at the scene at the corner of Basely and Manchester roads.

“Tragically, four people sustained fatal injuries. Paramedics treated 28 people at the scene and are in the process of transporting them to local hospitals for continued medical care,” McKenzie said.

Three light motor vehicles were also damaged. One person was trapped in their vehicle and had to be freed by the fire department using hydraulic rescue equipment.

eThekwini mayor Mxolisi Kaunda called on the police to leave no stone unturned in their investigation into the cause of the collision.

“It is so sad that we are starting the festive season on a bad note. Instead of enjoying Christmas, some families are now forced by these unfortunate circumstances to be in bereavement,” said Kaunda.

“Most accidents are as a result of human error and our city and the province at large is notorious for these fatal accidents during the December period. This needs to come to a stop. We warn sternly those who would disregard the rules in our city that our law enforcement personnel is waiting for them.”

A man was killed after his light aircraft crashed in Syferfontein in Westonaria on the West Rand at the weekend, paramedics said.
News
8 months ago

Seventeen people were injured on Sunday morning in a minibus crash on the M35 near KwaMakhutha southwest of Durban, KwaZulu-Natal.
News
8 months ago