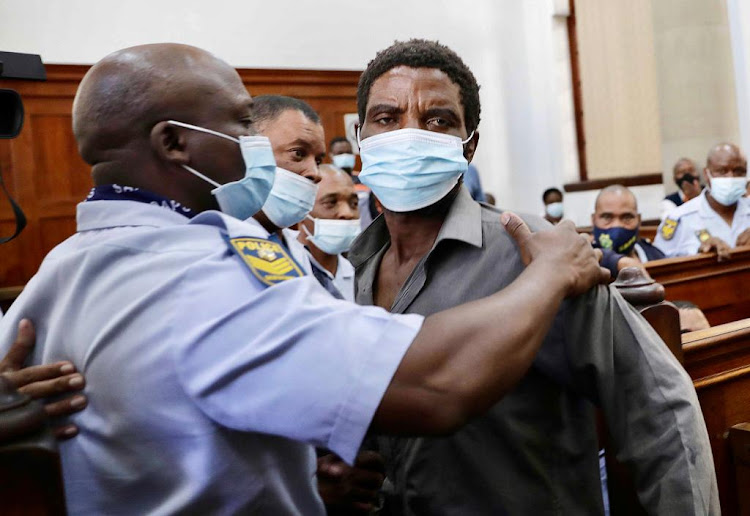 The face of the 49-year-old Khayelitsha, Cape Town, man arrested in connection with the fire that gutted the new National Assembly building in the parliamentary precinct has been revealed.

Mafe removed his mask and posed for those with cameras lining the dock. He turned around to give every photographer a chance to get a clear picture.

It is unusual for suspects to pose for pictures in court, especially when facing charges as serious as those preferred by the state against Mafe. His lawyer, Luvuyo Godla, told the court Mafe was aware his pictures were circulating on social media. He said it would be unfair to deprive the media of an opportunity to show his face. Mafe nodded in agreement when his lawyer addressed the court.

Mafe wore torn sneakers without laces, denim shorts and a creased shirt. His hair and beard were unkempt.

He faces five charges including housebreaking and theft for allegedly stealing laptops, crockery and documents from parliament, according to the charge sheet.

He also faces two charges of arson for allegedly setting the National Assembly building on fire and a charge of contravening the Explosives Act. The case was postponed to January 11 for bail information and further investigation.

After the proceedings, Eric Ntabazalila, spokesperson for the prosecution, said investigators had not been able to go to parliament to assess the extent of the damage.

“The counts include housebreaking with the intent to steal and theft, two counts of arson, possession of an explosive device and destruction of essential infrastructure.”

Ntabazalila said the postponement will allow investigators to “confirm bail information which includes the residential address of the accused, whether he has assets and so forth”.

“The other issue is the investigators have not been able to go to parliament, the crime scene, to assess the damage,” he said.

“The crime scene was active until late yesterday. When we come back next Tuesday, I am sure we will have that information. The defence intends applying for bail. The state will oppose bail and more charges are likely to be added as the investigation continues.”

Ntabazalila said Mafe is South African and stays in Site B, Khayelitsha.

There was a dispute in court between Mafe’s lawyer and the prosecution over the charges he is facing.

“The state wants to charge him under schedule 5 (for) the destruction of key infrastructure, a (national) key point,” Ntabazalila said.

Public works minister Patricia de Lille said it was a "very sad day for democracy in SA" after a fire broke out in parliament in Cape Town on Sunday ...
News
6 months ago

Public works and infrastructure minister Patricia de Lille has confirmed that a 49-year-old suspect has been arrested in connection with Sunday's ...
Politics
6 months ago