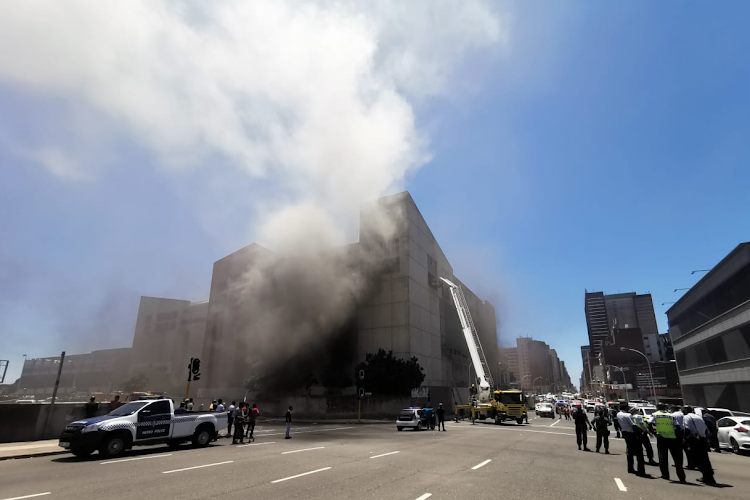 A fire broke out at the China Emporium on the corner of Anton Lembede and Brook streets in the Durban CBD on Friday.
Image: Marshall Security

At least 13 people, many of them Chinese nationals, sustained minor to moderate injuries after a fire broke out at the China Emporium on the corner of Anton Lembede and Brook streets in Durban’s CBD on Friday.

Firefighters and Metro police search and rescue members used ladders to get into the building to search for those who had been trapped.

Kyle van Reenen of Emer-G-Med said multiple emergency services responded to the scene shortly after 10am.

“Thirteen people were treated for injuries ranging from minor to moderate and taken to nearby hospitals. The cause of the fire is unknown and will form the subject of a police investigation,” he said.

13 people evacuated & treated for injuries ranging from minor to moderate. No children were found or injured and no fatalities reported.

Garrith Jamieson of ALS Paramedics said two people had moderate burns while a third was injured after jumping from a window.

Acting divisional commander of the eThekwini fire department Sifiso Mtshali confirmed that everyone who had been in the mall had been accounted for.

“There were people on the floor right above the fire and we managed to get them out using our hydraulic platforms,” said Mtshali.

“When we did the headcount it was confirmed that no-one was left inside the building.”

He confirmed that the fire was under control. He said the blaze was confined to the ground floor but “there's a lot of fire inside the building” where a lot of stock had been stored, “hence the flames”.

Mtshali could not say how long it would take to extinguish the blaze.

“We're very close to containing it, we will be moving to extinguishing very soon.”

Employees suspected that a generator could have ignited the blaze but Mtshali said: “The cause is still unknown. We still need to do an investigation.”

At least four people are trapped in a building in central Durban which caught alight on Friday.
News
5 months ago

The man accused of torching parliament on January 2 will have to wait another week for his much-anticipated bail hearing.
News
5 months ago

Two people died in a fire in Marianhill outside Durban on Wednesday morning after a shack in an informal settlement caught alight.
News
5 months ago