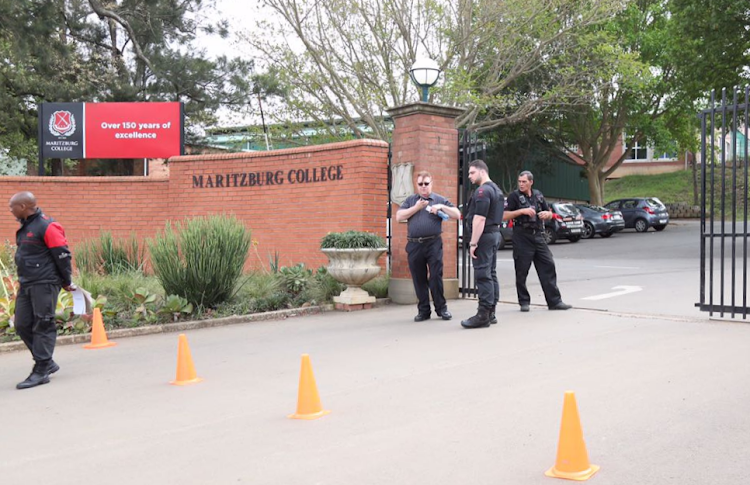 The governing body and staff of Maritzburg College are 'deeply upset about these revelations which are contrary to the entire spirit of both the orientation camp itself and the school'. File photo
Image: Jackie Clausen

Prefects and house leaders at top KwaZulu-Natal school Maritzburg College have been suspended after they allegedly urinated in a waterlogged long jump pit prior to grade 8s crawling through it as part of an orientation event.

The school has denied this was part of an “initiation”, saying it was an annual orientation programme.

“The grade 8 orientation camp has taken place since January 2015 and in no way constitutes an initiation practise. Unfortunately, the lapse in judgement by the senior boys hours before the start of the event was unexpected and unacceptable and is contrary to the spirit of the event and the school as a whole.

"School staff were unaware of this conduct until after the completion of the orientation camp,” the school’s governing body said on Wednesday.

The governing body said the “bad behaviour” was “disappointing and unacceptable and under investigation”.

Pupils at a prestigious KwaZulu-Natal school who were victims of alleged  “unacceptable behaviour” by a former staff member, have been asked to come ...
News
4 months ago

The orientation camp included various activities and an obstacle course.

“From the beginning of 2015, we introduced a two-day, one-night orientation camp for all grade 8s at the school during the first week of the academic year with a focus on the practical aspects of college life.

“We set out to educate our new pupils from the outset about the ethos and traditions of the school — two of the cornerstones of the education we provide.”

The governing body said at the conclusion of this year’s event a group of pupils reported they had developed a skin rash.

It was during this process that an allegation was made that the prefects had urinated in the pit.

In terms of national legislation and the school’s code of conduct, any form of initiation is prohibited.

The school began an investigation and it emerged that they had urinated in the pit hours before the grade 8s crawled through it.

The affected pupils were provided with medical treatment at the school’s clinic or at home.

“All boys who were implicated were suspended pending the finalisation of the investigation. This will culminate in a disciplinary hearing,” the governing body said.

“As this process is still under way we cannot predict what measures will be taken and what disciplinary outcomes will result."

The matter had been reported to the education department and the school body had been addressed.

“We are committed to fully investigating this incident and taking the necessary disciplinary steps.

“We are confident that those who were involved as well as all other pupils at our school will learn an important life lesson from this inappropriate behaviour.”

EUSEBIUS MCKAISER | A love letter to boys and men

"While we can be healthier human beings in the world, that requires a deep commitment to self-examining the worst of our current selves, and being ...
Ideas
3 months ago

My child has an underlying health condition, should they return to school?

The WHO says the return of children with underlying conditions should be done cautiously to ensure they are not exposed to environments that could ...
News
3 months ago

Pupils at Phomolong Secondary School in Thembisa could on Monday be seen carrying candles, while flowers have been placed at the gate where ...
News
3 months ago

St Andrew’s College headmaster Alan Thompson has stepped down with immediate effect after a review board found the school’s former water polo coach ...
News
4 months ago