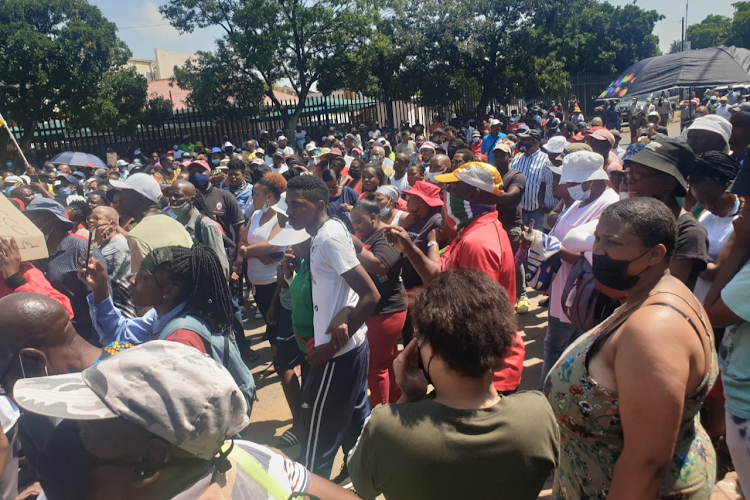 Hoërskool Jan Viljoen was an empty shell on Tuesday, as students remained at home and authorities moved to determine what exactly is going on at the Randfontein school.

On Monday, parents and other groups protested outside the school after video footage of a fight between a male and female pupil on Friday started circulating. WhatsApp group messages containing racial slurs started being shared.

Gauteng education MEC Panyaza Lesufi was at the school to investigate the cause of the fight and subsequent allegations of racism by pupils. The crowd became volatile and police discharged rubber bullets to disperse the protesters.

Acting education department spokesperson Oupa Bodibe said students would be taught from home until Lesufi had a chance to meet parents on Thursday evening. Bodibe said the meeting would be a chance for the MEC to address the parents on the incident and the racism allegations.

“He will report back on what he has gathered and the way forward. It is also a chance for parents to engage the MEC on their concerns. This includes all parents, no matter what side they are on. It won't be a one-sided conversation,” he said.

"We are not going to negotiate with racists any more. P**s off!"
TshisaLIVE
4 months ago

On Monday, Lesufi said he would be handing over evidence related to allegations of racism to police and to the SA Human Rights Commission (SAHRC). This included WhatsApp messages and footage of the fight.

Commissioner Andre Gaum, responsible for education matters at the SAHRC, said on Tuesday that the commission had not yet received the evidence but was already engaged in the matter.

“We have a team at the school collecting information and contact details. They are assessing the matter to see if there will be an investigation,” he said.

Gaum added that if there was prima facie evidence of there being a human rights issue at play, “then we will investigate”.

Andre Viljoen says he feels the school failed to deal with the situation and says things should never got to this stage. "They should have dealt with the two learners immediately." #HoërskoolJanViljoen @TimesLIVE pic.twitter.com/letaVgARJm

On Monday Lesufi addressed the parents, saying he was “ashamed and embarrassed” at the incident as the head of education in the province.

“Most of you didn't go to work today [Monday] because of an incident that happened here on Friday. That incident cannot be condoned and protected, it must be condemned.

“What we have gathered so far, all the evidence, all the WhatsApp messages ... all the messages that came from you as parents, we have handed them to police and the Human Rights Commission because we want this matter to receive the attention it deserves,” he said.

He said that based on reports received from the SGB and the principal, there were teachers and pupils who needed to explain their role.

“This country belongs to all of us and we are not going to be treated as stepchildren in our own country. We are not doing anyone a favour by enrolling our children in schools.”

On Tuesday morning, TimesLIVE's sister publication Sowetan interviewed two pupils at the school, who said they were involved in the fight on Friday.

A black Grade 8 pupil from Hoerskool Jan Viljoen in Randfontein on the West Rand explains what happened to him when he was a victim of an alleged racist incident at the school on 11 February 2022. @SowetanLIVE #HoerskoolJanViljoen pic.twitter.com/nSaEI49VQ8

A black Grade 8 pupil at Hoerskool Jan Viljoen in Randfontein on the West Rand recalls what happened to him when he was a victim of an alleged racist incident at the school on 11 February 2022. @SowetanLIVE #HoerskoolJanViljoen pic.twitter.com/9lkhkJiXpU

POLL | Should political parties protest outside schools where racism is alleged?

Does politics have a place at protests like those at Jan Viljoen High School this week?
News
4 months ago

As some parents chanted struggle songs and others stood with folded arms at the school gate, Bishop Tekane Matome stood on the sidelines praying.
News
4 months ago