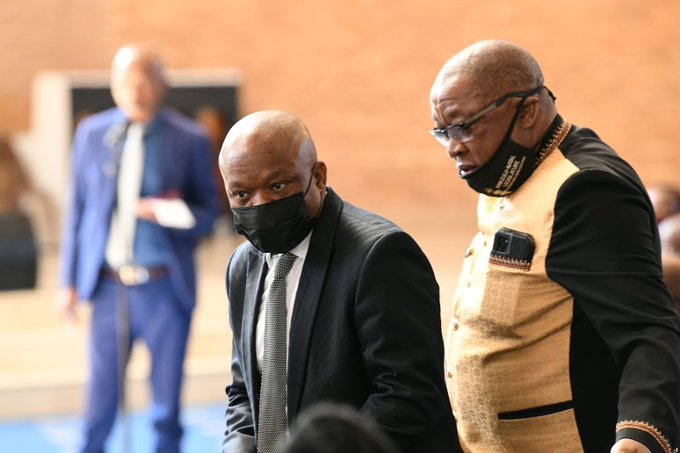 KwaZulu-Natal premier Sihle Zikalala says the greatest financial cost of the floods disaster is the infrastructure which has been destroyed. File photo.
Image: KZN provincial government via Twitter

The KwaZulu-Natal government has revised its estimated total cost of flood damage to approximately R17bn.

The province said there was an error on Sunday in its repor about damage to Passenger Rail Agency of SA (Prasa) infrastructure.

The cost estimate for resumption of service is R955.4m and long term rehabilitation work is estimated at R1.68bn.

Prasa, which lost about 300km of its rail infrastructure in the KwaZulu-Natal floods, has estimated its recovery costs to be between R2.8bn and R3bn, according to spokesperson Andiswa Makanda.

Transnet is yet to quantify its estimate as the damage is being assessed, said its spokesperson Ayanda Shezi.

KwaZulu-Natal premier Sihle Zikalala said on Sunday: “As we settle to take stock of our lives, we are convinced this is by far the greatest disaster to befall our country in our lifetime. The sheer loss of lives is simply unprecedented and the damage to infrastructure is unparalleled, certainly in the history of post-apartheid SA.

“The greatest [financial] cost of this disaster has been in infrastructure which has been destroyed. As we rebuild the physical environment around us, we must accept it will take longer and a much more nuanced programme for us to rebuild and restore hope and trust among the victims and the survivors.”

About 17,438 households have been affected by the disaster and 121,687 people were affected.

The death toll stands at 435 people while 54 are missing.

About 6,278 people are homeless while 7,245 people remain in shelters in eThekwini.

Water and sanitation minister Senzo Mchunu said government would use the rebuilding of infrastructure as a “renewal programme” instead of expensive small refurbishments.

He gave an assurance infrastructure rebuilding will be devoid of corruption.

“We are augmenting resources that each of us has for the benefit of the community. We are on top of things. We are going to do our best to make sure we are not interrupted by any form of corruption, and will be providing the service to the best of our ability within reasonable speed,” Mchunu said.

“We are pleased to have been able to restore services in a number of areas in the city despite the magnitude of this challenge. Water supply has been improved by 60% in the inner and outer western regions. There is also a noticeable improvement in the central and northern regions of 50% and 40% respectively,” he said.

By the end of this week, water supply will be restored in most areas affected in the south.

He said the oThongathi water treatment plant within the municipality, which was severely damaged, will take about six months to repair.

- Article amended to correct the cost of infrastructure damage erroneously provided on Sunday.

President Cyril Ramaphosa on Friday said there was no indication that two days of rain could lead to the catastrophe that resulted in the deaths of ...
Politics
4 weeks ago

Worst natural disaster in living memory, in which about 440 people died, has wreaked a heavy toll on infrastructure and services
News
4 weeks ago