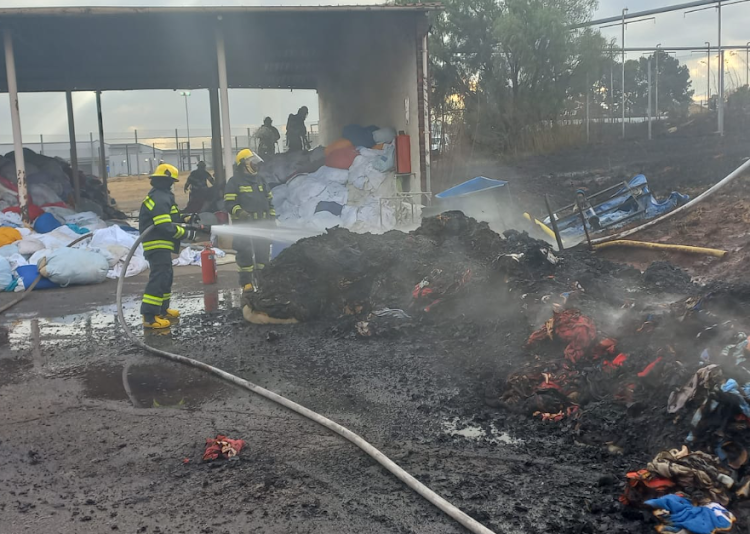 The fire at the Chris Hani Baragwanath Hospital in Soweto was contained on Wednesday afternoon.
Image: Supplied/ Gauteng health department

A fire broke out at Chris Hani Baragwanath Academic Hospital in Soweto on Wednesday.

The Gauteng department of health said the fire started in an open space near tents used for Covid-19 testing.

“Due to strong winds it spread to the laundry site and damaged part of the linen awaiting condemning (disposal),” the department said.

“City fire services from Dobsonville and Jabulani arrived before the fire spread to the usable linen area and the building,” the department added.

Last month, there was a blaze at Steve Biko Hospital in Pretoria.

After the incident, the department said it ruled out sabotage being behind the fires at public hospitals. Health MEC Dr Nomathemba Mokgethi said it was bizarre that the department had to contend with fires almost every year.

In February 2021, a fire broke out at the Carletonville Hospital, destroying R20m worth of equipment in a storeroom.

The blaze was confirmed to be an act of arson.

Meanwhile, the  Charlotte Maxeke Hospital's casualty unit recently reopened a year after a fire broke out at the facility.

The closure of the 2,000-bed hospital, Gauteng’s largest, saw patients being redirected to other hospitals that were soon struggling to cope with the influx of patients.

The Gauteng health department has not ruled out sabotage being behind fires at public hospitals.
News
1 month ago

The fire that destroyed R20m worth of equipment in a storeroom at the Carletonville Hospital in February this year was caused by arson, according to ...
News
8 months ago