What was meant by police minister's 'lucky rape' comment? 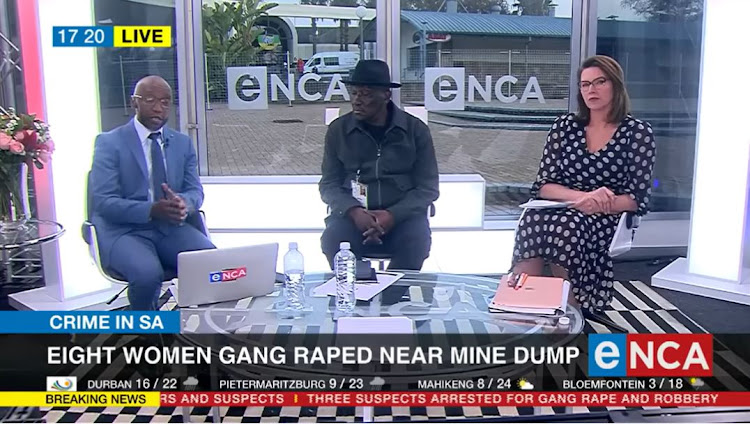 Police minister Bheki Cele, centre, in conversation with eNCA anchors Thulasizwe Simelane, left, and Sally Burdett after the news of the Krugersdorp gang rapes broke. Comments made by the minister during this conversation have been met with ire by some South Africans.
Image: Screengrab via eNCA/YouTube

Police minister Bheki Cele faces another foot-in-mouth saga, this time for his comments on the horrific rapes at a Krugersdorp mine dump on Thursday.

In conversation with eNCA anchors Thulasizwe Simelane and Sally Burdett on Friday, he gave details about the shocking attack, including that one woman had been raped by 10 men.

A clip of the interview has gone viral because the minister said one of the women “was lucky — if it is lucky” to be raped by just one man.

The context of the comment was that this woman was the only one who wasn't gang-raped.

Despite qualifying the sentence with “if it is lucky”, the minister has received backlash for the comment.

On Twitter, Mudzuli Rakhivhane, spokesperson for the One SA Movement, tweeted a clip of the conversation, commenting “Is this how the police think about rape? That victims in SA are lucky when they’re only raped by one person? Is this the state of our nation?”

1. Bheki Cele is a certifiable moron.
2. Is this how the police think about rape? That victims in South Africa are lucky when they’re only rapped by one person? Is this the state of our nation? pic.twitter.com/jgaXaR8oDT

Her tweet has garnered more than 40 comments so far, with most of the responses negative towards the minister.

@LaniCoetzee said: “It’s like he is talking about a bumper bashing. This is an horrific crime that has traumatised every victim and will affect them and their loved ones for a very long time. Why is he not furiously screaming about it? Not political enough for him?”

@TeresaOakley-Smith replied: “Outrageous comment, luck is nothing to do with rape.”

EUSEBIUS MCKAISER | Outrage about rape must be accompanied by action. Here’s what we might do

Criminals in SA are not scared of punishment. They worry about being arrested and charged, but know the odds of this are low
Opinion & Analysis
2 weeks ago

@GeehSport commented: “Imagine just one victim fearfully walking into a police station to report this brutal violation — only to be met with gross indifference and an apathetic response: 'Go home, you were lucky...' Which rock have we crawled out from? We really are living in prehistoric times.”

@Malebabo4 said: “It's a language issue,” to which @briceoka replied: “The word lucky is one of the most straightforward words in the English language.”

@mokoneMatebele retorted: “You know very well you misinterpreted the minister. What happened to those ladies is very painful, any side debate about the use of English and context would really be uncalled for.”

When asked for clarity on the statement, police ministry spokesperson Lirandzu Themba said: “There is no comment on this matter at this point.”

What did they do to suffer brutal deaths, families ask after two KZN matric pupils die in axe attack

What did two Ginyane High School matric pupils do to deserve such brutal deaths? This is the question plaguing family members and friends of Nqobile ...
News
2 weeks ago

Man who raped two children, including his own, gets 40 years in jail

A man who raped two children, including his daughter, on several occasions was sentenced to 40 years’ imprisonment by the Calvinia regional court in ...
News
2 weeks ago

A man whose rape case was struck off the roll because of outstanding DNA results in 2016, but went on to rape another woman after his release, was ...
News
2 weeks ago

The DA claims Cele has constantly failed over the last decade and "has blood on his hands".
Politics
2 weeks ago