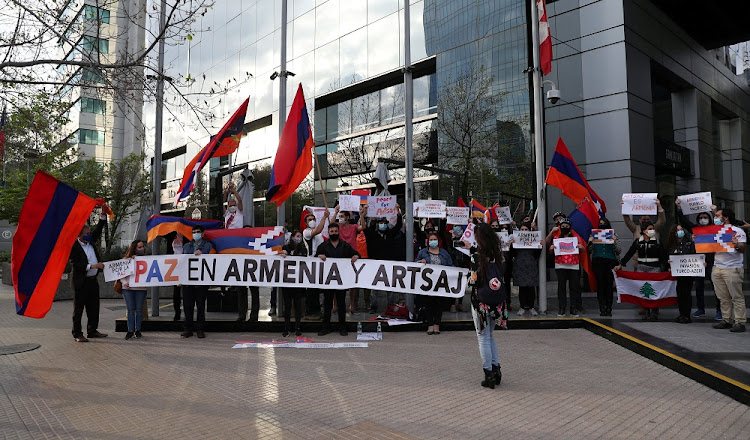 People supporting Armenia attend a protest against their military conflict outside the Azerbaijan Embassy in Santiago, Chile, October 5, 2020. The banner reads 'Peace in Armenia and Artsaj'.
Image: REUTERS/Ivan Alvarado

Syrian President Bashar al-Assad accused Turkish President Tayyip Erdogan of being the main instigator of the conflict in Nagorno-Karabakh, speaking in an interview with Russia's RIA news agency published on Tuesday.

The fighting between Azerbaijan and ethnic Armenians over the region began on Sept. 27 and has escalated to its deadliest level since the 1990s.

The fighting has increased international concern that other regional powers could be dragged into the conflict - Turkey has expressed solidarity with Azerbaijan while Armenia has a defence pact with Russia.

Azerbaijan's President Ilham Aliyev demanded on Sunday that Armenia set a timetable for withdrawing from the enclave of Nagorno-Karabakh and ...
News
1 year ago

Armenia's foreign ministry said on Friday it was ready to engage with the Organization for Security and Cooperation in Europe (OSCE) to re-establish ...
News
1 year ago