ES Reddy, who led the UN campaign against apartheid, dies at 96 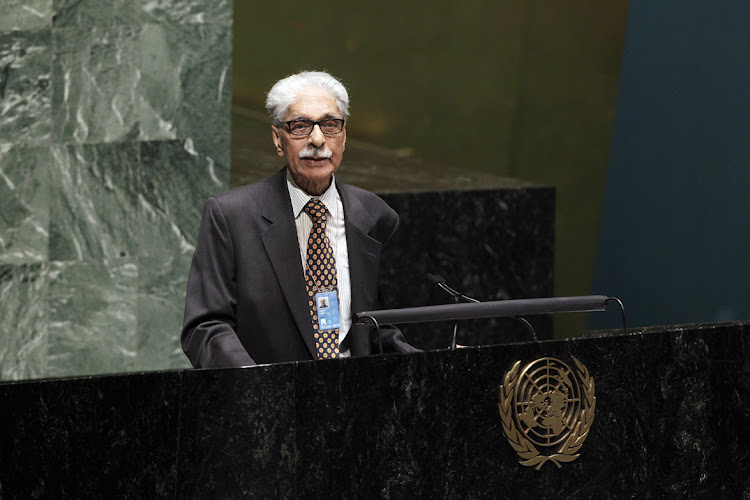 ES Reddy had been active in the support of the SA freedom movement for more than half a century and played a central role in promoting international sanctions against the country.
Image: via www.sahistory.org.za

Enuga Sreenivasulu Reddy, who had led the UN campaign against apartheid, died at the age of 96 in the US on Sunday.

Affectionately known as ES Reddy, he had been active in the support of the South African freedom movement for more than half a century and played a central role in promoting international sanctions against the country.

His death was announced on Sunday.

"ES Reddy, beloved husband of Nilufer Mizanoglu Reddy, father of Mina Reddy and Leyla Tegmo-Reddy, grandfather of Emilio and Manuel Flores, Chris and Nils Tegmo, great grandfather of Rohan Flores, Kai and Charlie Tegmo, passed away today, November 1. We are so proud of him and his pioneering work in the UN and beyond to reverse the ravages of racism and injustices. We will miss his incredible love, drive and passion for justice and affection."

'An implacable foe of apartheid'

In its message to Reddy on his birthday in July this year, the Ahmed Kathrada Foundation said although he was not a household name in SA, he is remembered by leaders and activists of the liberation movement with whom he had established close and comradely relationships.

The foundation said in his role at the UN, Reddy had distinguished himself as "an implacable foe of the apartheid system, working tirelessly to mobilise support of member states and strongly lobbying for comprehensive sanctions against apartheid".

"He spared no effort in seeking recognition for SA liberation movements and earned enduring friendships with key figures such as Oliver Tambo, president of the ANC, and Dr Yusuf Dadoo, chairman of the SA Communist Party and vice-chairman of the ANC-led Revolutionary Alliance," it said.

"Upon his retirement in 1985, he spent many years meticulously researching and writing the history of the SA liberation movement and its leaders, UN action against apartheid, anti-apartheid movements and campaigns, and relations between India and SA."

ES Reddy received the Order of Companions of OR Tambo, a national award from the South African government, in 2013.

'My blood boils when I see this': Old SA flag products for sale on Amazon UK

Twitter users are disturbed by the sale of products depicting the old SA flag on Amazon UK.
News
11 months ago

Bullied as a child, Lindie Koorts clings to her identity more firmly than ever, calling it an act of resistance
Opinion & Analysis
11 months ago

'This is my lawyer, Priscilla Jana. She is also my daughter". This is how my mother-in-law, Albertina Sisulu, introduced me to Priscilla Jana during ...
Opinion & Analysis
1 year ago