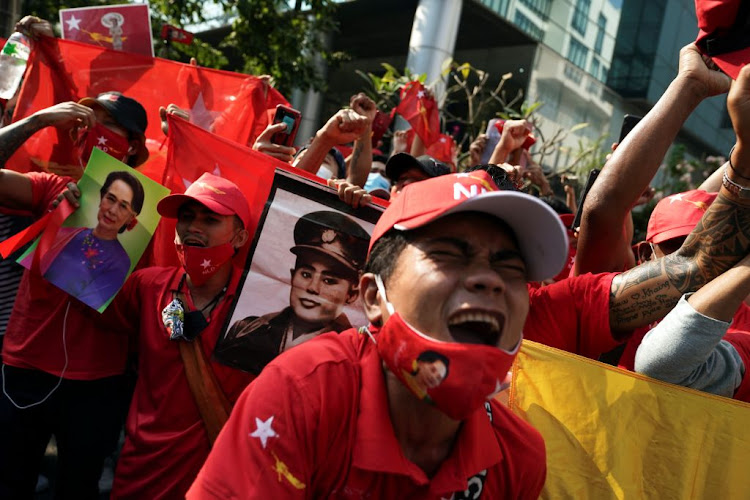 NLD supporters shout slogans in front of the Myanmar embassy in Bangkok, Thailand, during a rally on February 1 2021 after the military seized power from a democratically elected civilian government and arrested its leader Aung San Suu Kyi.
Image: REUTERS/Athit Perawongmetha

The UN led condemnation of Myanmar's military on Monday after it seized power and called for the release of elected leaders, including Nobel laureate Aung San Suu Kyi.

UN secretary-general Antonio Guterres said the developments were a “serious blow to democratic reforms” and urged all leaders to refrain from violence and respect human rights, a UN spokesperson said.

The UN human rights chief, Michelle Bachelet, called for the release of at least 45 people who have been detained in Myanmar and voiced concern at internet restrictions limiting freedom of expression “at this critical and frightening time”.

“I remind the military leadership that Myanmar is bound by international human rights law, including to respect the right to peaceful assembly, and to refrain from using unnecessary or excessive force,” Bachelet said in a statement.

The US, Britain, Australia and the EU condemned the military's coup and detentions and its declaration of a state of emergency. The army said it had taken action in response to “election fraud”.

Myanmar's powerful military chief, Senior General Min Aung Hlaing, is in the spotlight after politicians from the ruling National League for ...
News
3 months ago

China's response, however, was more muted.

“We have noted what has happened in Myanmar and are in the process of further understanding the situation,” foreign ministry spokesperson Wang Wenbin told a daily news briefing in Beijing.

“China is a friendly neighbour of Myanmar's. We hope that all sides in Myanmar can appropriately handle their differences under the constitution and legal framework and safeguard political and social stability,” he added.

US president Joe Biden has been briefed on the situation, the White House said.

“The United States opposes any attempt to alter the outcome of recent elections or impede Myanmar's democratic transition, and will take action against those responsible if these steps are not reversed,” White House spokesperson Jen Psaki said.

Reflecting similar views of several Western governments, US secretary of state Antony Blinken called for the release of Suu Kyi and the others detained by the military.

“We call on Burmese military leaders to release all government officials and civil society leaders and respect the will of the people of Burma as expressed in democratic elections on November 8,” Blinken said in a statement, using another name for Myanmar.

US Senate Republican leader Mitch McConnell, who has long had close ties to Suu Kyi, called for a strong response from the Biden administration, urging it to “impose costs on those who stand in their way.”

British prime minister Boris Johnson also condemned the coup. “The vote of the people must be respected and civilian leaders released,” he said on Twitter.

Japan said it opposed any reversal of the democratic process in Myanmar.

“We strongly call on the military government to restore democracy as soon as possible,” said a foreign ministry statement.

That was echoed by the head of the European Commission, Ursula von der Leyen, who called for the “immediate and unconditional release” of all those detained.

Switzerland's foreign ministry also called for the release of those detained and voiced support for “the aspirations of the people of Myanmar for democracy, freedom, peace and development.”

Australian foreign minister Marise Payne called on the military “to respect the rule of law, to resolve disputes through lawful mechanisms and to release immediately all civilian leaders and others” who had been detained.

Bangladesh, which is sheltering around one million Rohingya who fled violence in Myanmar, called for “peace and stability” and hoped a process to repatriate the refugees could move forward.

Singapore's foreign ministry urged all parties to exercise restraint and work towards a positive and peaceful outcome in comments that were echoed by Malaysia and Indonesia.

However, other fellow members of regional grouping, the Association of Southeast Asian Nations (ASEAN), took a more hands-off approach.

“It's their internal affair,” Thailand's deputy prime minister Prawit Wongsuwan told reporters when asked about the coup in the country's northern neighbour. Cambodia and the Philippines made similar comments.

The detentions came after days of escalating tension between the civilian government and the military after the November 8 election, in which Suu Kyi's National League for Democracy (NLD) scored a landslide win.

The army on Monday handed power to military chief Min Aung Hlaing and imposed a state of emergency for one year, according to a statement on a military-owned television station.

A Myanmar model and doctor said she would appeal against a medical council decision to revoke her licence for posting photos of herself on Facebook ...
News
1 year ago

Two reporters jailed in Myanmar freed after more than 500 days

Two journalists jailed in Myanmar after they were convicted of breaking the Official Secrets Act walked free from a prison on the outskirts of Yangon ...
News
2 years ago
Next Article