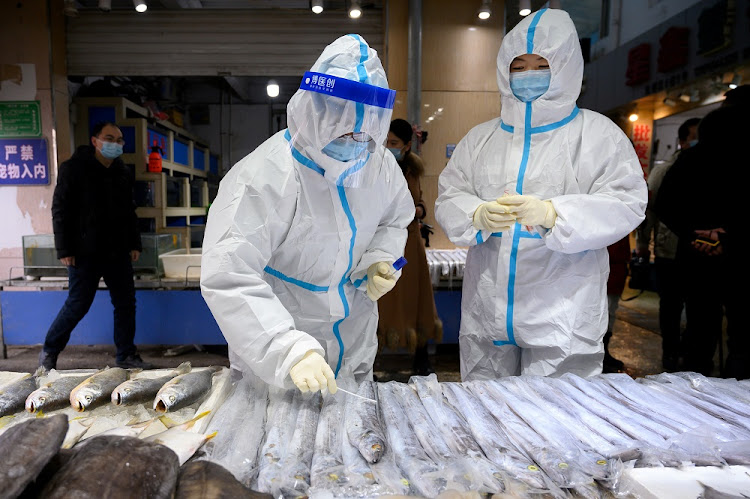 A staff member from the center for disease control and prevention collects a swab from a seafood stall for nucleic acid testing, at a market following the coronavirus disease (Covid-19) outbreak, in Taiyuan, Shanxi province, China January 20, 2021.
Image: cnsphoto via REUTERS . File photo

China and its neighbours must not only crack down on wildlife trade but also shut legal loopholes that allow disease-prone species to be farmed, experts said after an investigation team concluded that Covid-19 most likely originated in animals.

A World Health Organisation-led study, published Tuesday, said it was “likely to very likely” that SARS-CoV-2, the virus that caused the global pandemic, was introduced to humans from bats via an intermediary species, with wildlife farming playing a crucial role.

“With farms you have a large pool of animals that are more or less genetically homogeneous, where a virus can easily evolve,” said Christian Walzer, chief veterinarian at New York's Wildlife Conservation Society.

China tested thousands of animal samples to trace the coronavirus's origins, but the study said more investigations were required. It also recommended surveys at mink and raccoon dog farms, which China still allows even though they are infection-prone.

“Cramming millions of animals together in these abusive industries creates a perfect petri dish for pandemics, and unless we ban farming for fur ... we will continue to play Russian roulette with global public safety,” warned Peter Li, China expert at Humane Society International.

Pangolin scales were an officially recognised TCM ingredient — used to treat conditions like arthritis — until last year. Though China has since cracked down, activists complain that punishments remain uneven: in a recent case, traffickers caught on the island province of Hainan were given only relatively small fines.

Foreign traffickers also remain in operation. A special economic zone in the border district of Mong La in Myanmar, owned by Chinese businesses, has long been a source of pangolin scales delivered into China.

“In many places, wildlife trading isn't seen as a priority or even as something that is necessarily wrong, and we are suffering a pandemic because of it.”

China says the original spillover event could have occurred beyond its border, but critics say wildlife trading networks in Myanmar and Laos would not exist without Chinese demand, and Chinese investment.

“I don't buy it that the Chinese are not responsible for these: they are driving it,” said Amanda Whitfort, an animal welfare law specialist at Hong Kong University.

Data was withheld from World Health Organisation investigators who travelled to China to research the origins of the coronavirus epidemic, WHO ...
News
1 year ago

A joint WHO-China study on the origins of Covid-19 says that the virus was probably transmitted from bats to humans through another animal.
News
1 year ago

The former director of the US Centers for Disease Control and Prevention (CDC) said he believes the coronavirus that causes Covid-19 likely escaped ...
News
1 year ago