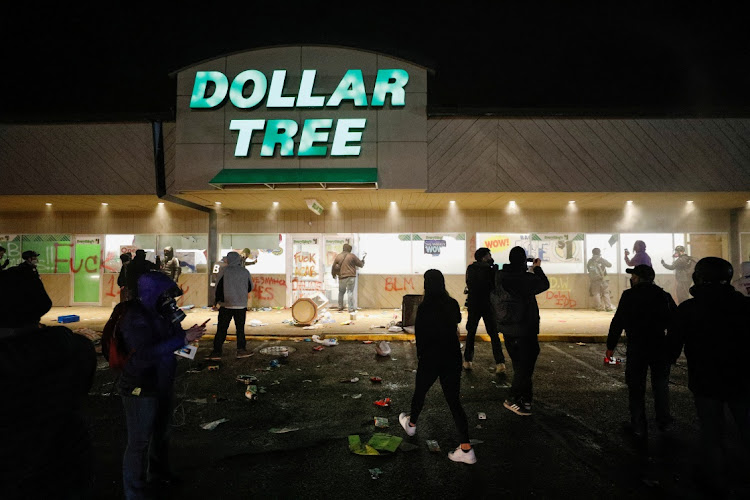 A Dollar Tree store that was looted has its sprinklers turned on as protesters gather outside Brooklyn Center Police Department a day after Daunte Wright was shot and killed by a police officer, in Brooklyn Center, Minnesota, US, on April 12 2021.
Image: REUTERS/Nick Pfosi

The police chief of a Minneapolis suburb where a young black man was shot to death by police during a traffic stop, sparking two nights of civil unrest, said on Monday the officer in question apparently drew her gun instead of her Taser by mistake when she opened fire.

Judging from an initial review of police video footage of officers' fatal encounter on Sunday with Daunte Wright, 20, in the town of Brooklyn Center, Police Chief Tim Gannon said the shooting seemed to be unintentional.

“This appears to me, from what I viewed and the officers' reaction and distress immediately after, that this was an accidental discharge that resulted in the tragic death of Mr. Wright,” the chief told a news briefing on Monday.

The Hennepin County medical examiner ruled the death a homicide, confirming in an autopsy the slain motorist, who police said was pulled over for of an expired vehicle registration, was killed by a gunshot wound to the chest.

During a memorial vigil on Monday evening at the spot where Wright was killed, relatives remembered him as a good-natured father who worked multiple jobs to support his 2-year-old son, and they rejected the notion that a mere accident was to blame for his death.

'BROKEN IN A THOUSAND PIECES'

“My brother lost his life because they were trigger happy,” his older half sibling, Dallas Wright, told the crowd as rain began to fall.

“My heart is broken in a thousand pieces ... I miss him so much, and it's only been a day,” his mother, Katie Wright, said as she wept. “He was my life, he was my son and I can never get that back. Because of a mistake? Because of an accident?”

The fatal police shooting of a 20-year-old Black man in a Minneapolis suburb appeared to be an "accidental discharge" by an officer who drew her gun ...
News
1 month ago

Wright's father, Aubrey, told the Washington Post his son had dropped out of high school a few years earlier due to a learning disability.

The shooting roiled a region already on edge as last year's killing of George Floyd, a 46-year-old black man who died with his neck pinned to a Minneapolis street under a white policeman's knee, was being recounted in the trial of a former officer charged with Floyd's murder.

Wright was killed just 10 miles from where Floyd lost his life in an arrest for allegedly passing a bogus $20 bill, unleashing a months-long nationwide upheaval of protests and civil strife over racial injustice in the US law enforcement system.

Sunday's shooting of Wright immediately ignited a night of street skirmishes between police and protesters in Brooklyn Center, with local news media reporting looting and burglaries of about 20 businesses at a nearby shopping centre.

Disturbances flared anew on Monday, as hundreds of protesters braving a steady downpour and defying a curfew ordered by Governor Tim Walz clashed with law enforcement as darkness fell outside police headquarters in Brooklyn Center.

A crowd surged against a chain-link fence erected to keep protesters at bay, some hurling bottles and other projectiles as police responded by firing volleys of teargas and what appeared to be non-lethal plastic rounds.

A nearby discount store was looted and vandalised, but the bulk of the demonstrators appeared to have drifted away by 10pm local time.

'I JUST SHOT HIM'

Police chief Gannon told reporters hours earlier that a routine traffic stop of Wright had escalated into a deadly confrontation when officers ran a check on his expired vehicle registration and found an outstanding warrant for him.

Police did not elaborate on the warrant, but public records showed a judge had issued a warrant for Wright's failure to appear in court on two misdemeanour charges last summer, according to the New York Times.

Police fired teargas on Sunday to disperse angry protesters after an officer fatally shot a Black man about 10 miles (16km) from where George Floyd ...
News
1 month ago

Police video footage presented by Gannon showed an officer trying to handcuff Wright next to the car, before Wright broke free and got back inside his car. At that point, a second officer yells, “Taser, Taser, Taser,” before firing a single shot from her handgun, the video shows.

“Holy shit, I just shot him,” the policewoman is heard to shout as the car rolls away with Wright still in the driver's seat. The car travelled several blocks before striking another vehicle and coming to a stop.

Ben Crump, the attorney who helped win a $27m civil settlement for the Floyd family from the city of Minneapolis, said he was also representing the Wrights.

“Daunte Wright is yet another young black man killed at the hands of those who have sworn to protect and serve all of us — not just the whitest among us,” Crump said in a statement.

Wright's mother told reporters on Sunday she had received a call from her son telling her police had pulled him over for having air fresheners dangling from his rear-view mirror, which is illegal in Minnesota. She could hear police tell him to get out of the vehicle, she said.

Gannon said “a hanging item from the rear-view mirror” was discovered when police pulled Wright over.

Police shot and killed a Knoxville, Tennessee, high school student on Monday after they said he opened fire on them in a campus bathroom, wounding an ...
News
1 month ago

The judge in the trial of Derek Chauvin, the former Minneapolis policeman charged with George Floyd's deadly arrest last May, denied a defense ...
News
1 month ago

As the world follows the often-emotional testimony in the trial of Derek Chauvin, the former Minneapolis police officer accused of murdering George ...
News
1 month ago
Next Article