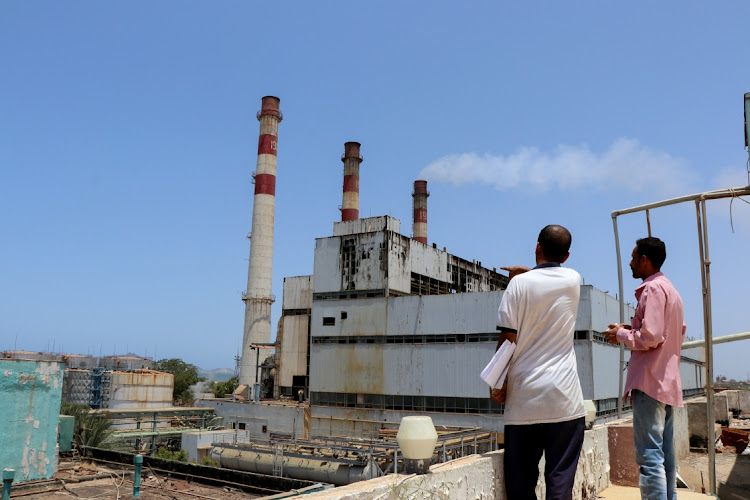 Only two turbines out of five at the diesel-fired al-Hasswa plant are still running, producing up to 50 megawatts (MW) of power in a region where the deficit hovers around 300MW. Piles of trash make the building seem abandoned and dust and diesel particles fill the air.

“In its 35 years of existence, al-Hasswa station never had any kind of maintenance, except in 2016 ... when the two turbines were restored,” Mojamal, the plant director, said.

After a military coalition led by Saudi Arabia drove out the Iran-aligned Houthi movement from Aden in 2015, the city remains on edge and paralysed due to a rivalry between the Saudi-backed government and Yemen's main southern separatist group.

The Southern Transitional Council (STC), backed by the United Arab Emirates, had twice seized Aden and other southern areas before Saudi Arabia brokered a power-sharing deal to focus its feuding allies on the battle against the Houthis.

In its fight for independence, the STC has created a parallel administration by taking over several state buildings, and used the collapse of public services to rally antigovernment protests.

STC and government forces remain entrenched in their positions in Aden despite a deal to redeploy troops under the Riyadh pact.

Flags of the former state of South Yemen, which was reunited with the north in 1990, flutter above Aden's dirt-strewn streets. At night, the lack of street lighting compounds residents' fears over the fragile security situation.

Private power generators whirr in every neighbourhood, despite fuel provisions from Saudi Arabia for Aden's power plants. Car batteries are a must in a household to keep the lights on.

Yemen's red, white and black national colours still fly over Al-Hasswa power plant, one of the rare buildings in the city that is still under the government control.

A new 240-MW power plant was completed this year but the government says it still needs a degasification unit and grid installation. The STC says the delays aim to punish southern provinces for self-determination demands.

“Electricity comes for one or two hours and disappears for 5 or six every day ... that disabled all the fridges and air-conditioners,” said Fawzia Sayf Tabet a resident in her 50s.

The multifaceted war that has entered its seventh year has crippled Yemen's economy and divided the country, with the Houthis holding most big urban centres, and caused what the United Nations says is the world's largest humanitarian crisis.

In March, dozens of protesters stormed a presidential palace in Aden demanding payment of public sector salaries. The economic crisis has been compounded by the coronavirus pandemic.

“We have an electricity problem but we also have a salary problem, we haven't been paid for eight months now,” said Shaheem Abdullah Mastour, a government employee.

To contain rising tensions, Saudi Arabia this week hosted talks between officials from Abd-Rabu Mansour Hadi's government and the STC to implement the pact first agreed in 2019.

While a new cabinet was formed that includes STC members, both sides have yet to withdraw troops outside Aden and neighbouring Abyan province.

“Hopefully, we will also agree on people to appoint as governors for the southern provinces,” said a Hadi government official who declined to be named.

Riyadh cannot afford a new front-line in the south as the coalition battles the Houthis in Marib, the government's last stronghold in the north.

The US and the United Nations are pushing for a nationwide ceasefire needed to revive stalled negotiations to end the war. The STC wants to include self-determination for the south in the talks.

“The US and its allies, including Saudi Arabia, have told everyone who wants to hear that an independent state in South Yemen will not be tolerated,” said one of the sources.

Eskom woes: SA on the brink of total darkness

CEO André de Ruyter might be doing his best, but the disarray at Eskom’s power stations is so far gone that it seems to be a miracle SA has any ...
Opinion & Analysis
2 weeks ago

The cooling towers at Rugeley Power Station in Staffordshire, England, were brought down in a controlled demolition to be replaced by low carbon ...
News
1 week ago

Many years on, Mpumalanga’s air quality case is still ... up in the air