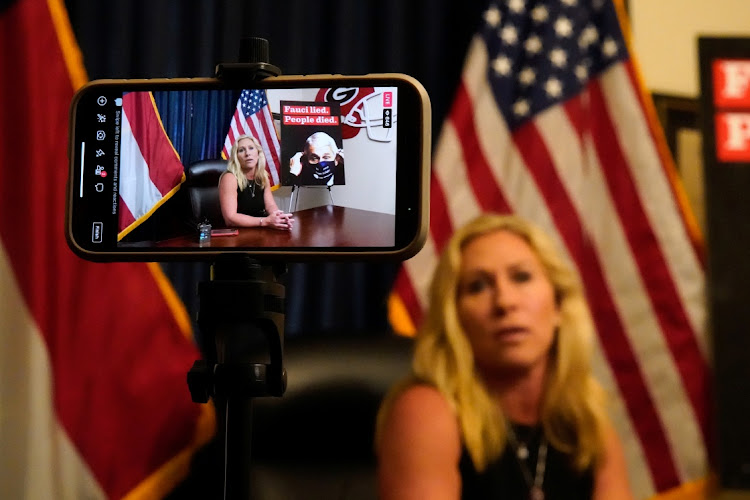 A smartphone records as US Rep. Marjorie Taylor Greene speaks to reporters about being temporarily suspended from Twitter for tweets which violated the social media's misinformation policy on Covid-19 from her office in Longworth House Office Building in Washington, US, July 20, 2021.
Image: REUTERS/Elizabeth Frantz

Greene posted that the coronavirus is not dangerous for non-obese people and those under 65, and that organisations should not force “non-FDA” approved vaccines or masks. These tweets have been labelled as “misleading” by the platform.

The US is using vaccines made by Pfizer Inc, Moderna Inc and Johnson & Johnson under Food and Drug Administration's emergency use authorisation. None of these vaccines are fully approved but numerous studies have proven their efficacy.

US President Joe Biden has called on the social media companies to take action on vaccine misinformation.

In a video statement on Facebook Live, Greene acknowledged that she had been temporarily suspended from the platform and blamed the Biden administration for trying to control free speech.

“Remember, last week when our press secretary said the White House is working to stop the spread of (misinformation) because they want to be careful and they want to be in control of the information that is shared about Covid-19 and vaccines, isn’t that concerning?” Greene said.

The Republican representative has come under fire before for remarks on the pandemic. In June she apologised after comparing Covid-19 mask requirements and vaccinations to the Holocaust that killed 6 million Jews.

In January, Twitter locked Greene's account after she sparred with a state election official over voter fraud allegations.

US Secretary of the Department of Homeland Security Alejandro Mayorkas on Monday told any migrants fleeing unrest in Cuba: "Let me be clear: If you ...
News
6 months ago

‘It was like a cold’: infections after J&J jabs proving to be ‘mild to moderate’

After being stuck on their ships for many months thanks to the pandemic, sailors can at last take shore leave
World
7 months ago