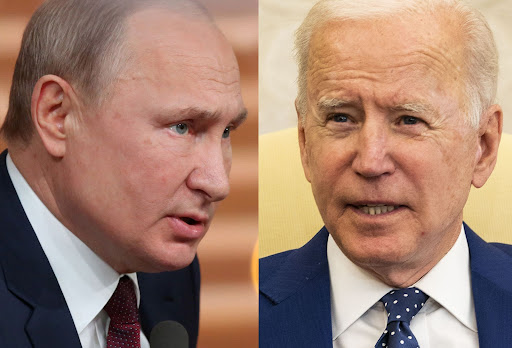 Putin sought the call - which Biden took from his home in Wilmington, Delaware, where he’s vacationing - as a prelude to negotiations on European security at the start of the year, the Kremlin said.
Image: Bloomberg

Russia expressed satisfaction with the outcome of Thursday’s phone call between presidents Joe Biden and Vladimir Putin, easing the month-long standoff over Ukraine even as the US repeated its warning to Moscow to de-escalate tensions.

While White House press secretary Jen Psaki said in a statement that Biden reiterated the US and its allies will “respond decisively” if there is an invasion of Ukraine, Kremlin foreign policy aide Yuri Ushakov said Putin was pleased with the conversation, setting the stage for three sets of negotiations on European security next month.

“This is what we are working for and for this our presidents reached an agreement, which is why we are happy and satisfied,” Ushakov told reporters after the phone call. “Today’s conversation was good, constructive, frank, and it seems to me that it provides not a bad, even in fact a good, basis for the start of negotiations.”

The softer rhetoric, coupled with the prospect of further talks next month, represents a dialling down of regional stresses that worsened when Russia began massing troops along the border with Ukraine earlier this year. Both sides “have partially drawn a line under further escalation of tensions”, the Tass news agency cited Leonid Slutsky, head of the State Duma’s committee on foreign affairs, as saying on Friday.

Bilateral US-Russia talks will take place in Geneva on January 9 and 10, followed by a Russia-Nato Council meeting in Brussels two days later and negotiations in Vienna within the OSCE framework on January 13, Ushakov told reporters. Biden and Putin agreed to keep in regular contact during the negotiations and to oversee the bilateral talks directly, he said.

Russian President Vladimir Putin told US President Joe Biden in their video conversation last week he’s ready to meet in person, according to ...
News
6 months ago

That 50-minute conversation began at 3.35pm Washington time, or 11.35pm in Moscow, according to the White House. Putin requested the talks — the second such conversation the two leaders have held this month — and by successfully persuading his US counterpart to do so, may have been seeking to bolster his standing both at home and abroad, according to analysts.

Biden took the call from his home in Wilmington, Delaware, where he’s vacationing — as a prelude to the negotiations on European security at the start of the year, the Kremlin said.

Biden laid out two possible paths during the call: diplomacy or serious consequences, according to a US official who briefed reporters on condition of anonymity. The consequences likely include augmentation of Nato forces and sweeping economic repercussions, the person said. The US plans to closely monitor troop movements at Russia’s border with Ukraine, the person added.

“President Biden also expressed support for diplomacy, starting early next year with the bilateral Strategic Stability Dialogue, at Nato through the Nato-Russia Council, and at the Organisation for Security and Co-operation in Europe,” Psaki said. “President Biden reiterated that substantive progress in these dialogues can occur only in an environment of de-escalation rather than escalation.”

After Biden’s warning that Russia faced huge sanctions if it attacks Ukraine, Putin responded that further large-scale penalties would lead to a severing of relations between Moscow and the West, Ushakov said.

“It will be a colossal mistake which could lead to the most serious consequences,” Ushakov said. That could have implications for talks on arms control, cybersecurity, climate change and other topics the US wants to pursue with Russia.

The White House plans to consult with allies ahead of the dialogues next month and will brief partners on Thursday’s call between Biden and Putin.

Biden says US will not put troops in Ukraine, as tensions with Russia ease

US President Joe Biden said on Wednesday that putting American troops on the ground in Ukraine to deter a potential Russian invasion was "not on the ...
News
6 months ago

A recent call between the two is said to have resulted in them getting their messages, with some jest thrown in
World
6 months ago