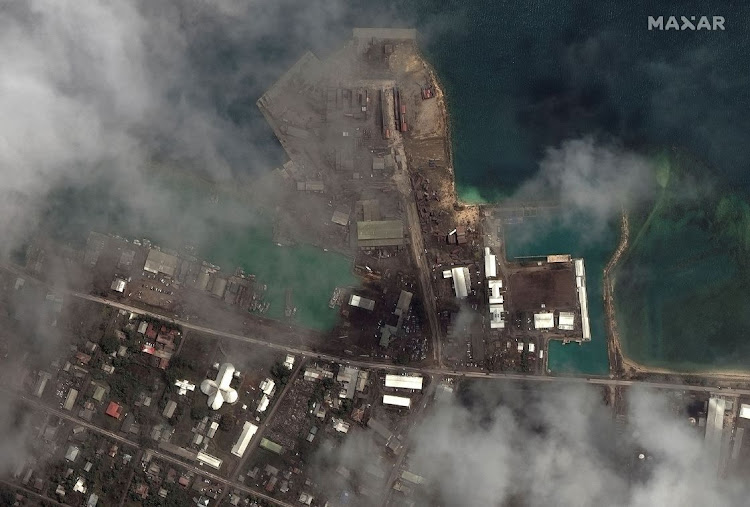 Tonga's small outlying islands have sustained major damage from a huge volcanic eruption and tsunami, the United Nations said on Tuesday, with downed communications and a blanket of ash hampering rescue efforts.

Tonga police have told the New Zealand High Commission that the confirmed death toll stands at two but with communications in the South Pacific island nation cut, the true extent of casualties was not clear.

“The priority now will to be get supplies to Tonga, and the biggest constraint on that at the moment ... is the airport. There is still a significant amount of ash,” Australia's Minister for the Pacific Zed Seselja said.

Tongan officials were planning to evacuate people from outer islands where conditions were “very tough, we understand, with many houses being destroyed in the tsunami”, Seselja said.

The United Nations said a distress signal was detected in an isolated, low-lying Ha'apai islands group, adding it had particular concerns about Fonoi and Mango islands. According to the Tonga government, 36 people live on Mango and 69 on Fonoi.

The Tongan navy reported major damage in the Ha’apai islands which were hit by waves estimated to be 5-10 metres (15-30 feet) high, said the UN Office for the co-ordination of Humanitarian Affairs (OCHA).

Surveillance images taken by the New Zealand defence force and circulated on social media in Tonga showed “catastrophic damage” to the outlying island of Atata.

The islands of Fonoifua, Niniva, Nomuka and Mango all had damage ranging from extensive to catastrophic, with an entire village destroyed on Mango.

The Hunga Tonga-Hunga Ha'apai volcano, which sits on the seismically active Pacific Ring of Fire, is about 65km (40 miles) north of Tonga's capital.

The eruption sent tsunami waves across the Pacific Ocean and was heard some 2,300km (1,430 miles) away in New Zealand.

The South Pacific archipelago has remained largely cut off from the world since the eruption which cut its main undersea communications cable.

A thick layer of ash blankets the islands, the New Zealand High Commission said, adding it was working to establish communications with smaller islands “as a matter of priority”.

British national Angela Glover, 50, was killed in the tsunami as she tried to rescue the dogs she looked after at a rescue shelter, her brother said, the first known death in the disaster.

“We don't have any further information that would suggest ... significant casualties,” Seselja told the Australian broadcaster Nine's Today show.

The airport was likely to be open by Wednesday, he said.

Tonga's deputy head of mission in Australia, Curtis Tu'ihalangingie, said Tonga was concerned that aid deliveries could spread Covid-19 to the Covid-19-free nation.

“We don't want to bring in another wave — a tsunami of Covid-19,” Tu'ihalangingie told Reuters by telephone, urging the public to wait for a disaster relief fund to donate.

Any aid sent to Tonga would need to be quarantined, and it was likely no foreign personnel would be allowed to disembark aircraft, he said.

The Red Cross said it was mobilising its network to respond to what it called the worst volcanic eruption the Pacific has experienced in decades.

The affect of the huge eruption was felt as far away as the US. Two people drowned off a beach in Peru due to high waves caused by the tsunami, while officials in Japan reported several evacuations.

The island of Hunga-Tonga-Hunga-Ha'apai all but disappeared after the blast, according to satellite images  taken about 12 hours later, making it difficult for volcanologists to monitor activity.

Experts said the volcano, which last erupted in 2014, had been puffing away for about a month before Saturday's eruption.

Australia's Minister for the Pacific Zed Seselja said initial reports suggested no mass casualties from Saturday's eruption and tsunami but ...
News
5 months ago