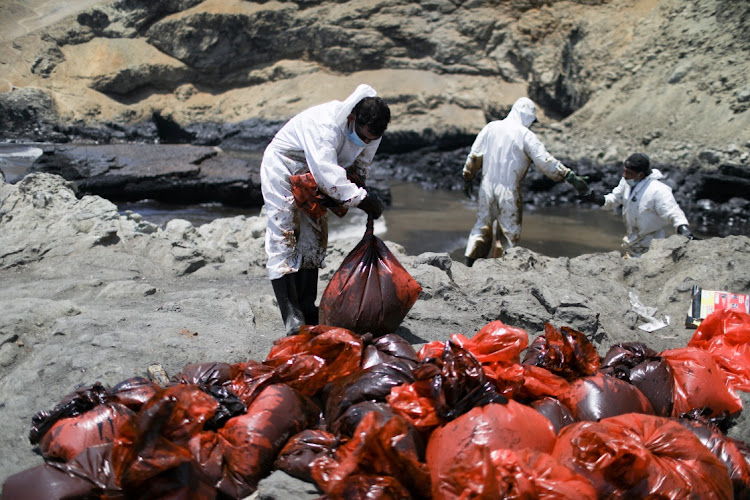 Workers clean up an oil spill caused by abnormal waves, triggered by a massive underwater volcanic eruption half a world away in Tonga, at the Peruvian beach in Ventanilla, Peru, January 18, 2022.
Image: REUTERS/Pilar Olivares

Two New Zealand navy vessels will arrive in Tonga on Friday carrying critical water supplies for the Pacific island nation reeling from a volcanic eruption and tsunami and largely cut off from the outside world.

Hundreds of homes in Tonga's smaller outer islands have been destroyed, and at least three people were killed after Saturday's huge eruption triggered tsunami waves, which rolled over the islands causing what the government has called an unprecedented disaster.

With its airport smothered by volcanic ash and communications badly hampered by the severing of an undersea cable, information on the scale of the devastation has mostly come from reconnaissance aircraft.

The Red Cross said its teams in Tonga had confirmed that salt water from the tsunami and volcanic ash were polluting the drinking water sources of tens of thousands of people.

“Securing access to safe drinking water is a critical immediate priority... as there is a mounting risk of diseases such as cholera and diarrhoea,” Katie Greenwood, the Pacific head of delegation for the International Federation of Red Cross and Red Crescent Societies, said in a statement.

The Hunga Tonga-Hunga Ha'apai volcano erupted with a blast heard 2,300km (1,430 miles) away in New Zealand and sent tsunami waves across the Pacific Ocean.

James Garvin, chief scientist at NASA's Goddard Space Flight Center, said the force of the eruption was estimated to be equivalent to five to 10 megatons of TNT, an explosive force more than 500 times the nuclear bomb dropped by the US on Hiroshima, Japan, at the end of World War 2.

New Zealand's foreign ministry said Tonga had approved the arrival of HMNZS Aotearoa and the HMNZS Wellington in the Covid-19-free nation, where concerns about a potential coronavirus outbreak are likely to complicate relief efforts.

Simon Griffiths, captain of the Aotearoa, said his ship was carrying 250,000 litres of water, and had the capacity to produce another 70,000 litres a day, along with other supplies. 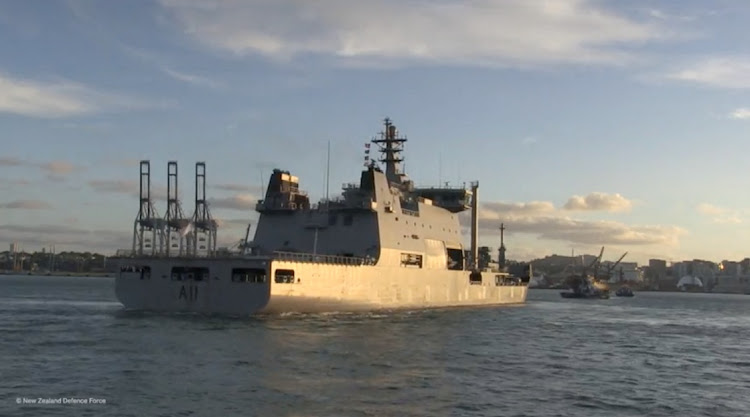 “For the people of Tonga, we're heading their way now with a whole lot of water,” Griffiths said in a release.

Other countries and agencies including the United Nations are drawing up plans to help.

A Chinese foreign ministry spokesperson said it would send help, including water and food, when the archipelago's main Fua'amotu International Airport reopens. It was not damaged but was covered in ash, which has to be cleared manually,

“We thought that it would be operational yesterday, but it hasn't been fully cleared yet because more ash has been falling,” Fiji-based UN co-ordinator Jonathan Veitch said on Wednesday.

Pacific neighbour Fiji will send defence engineers on Australia's HMAS Adelaide, which is due to set sail from Brisbane for Tonga on Friday, a Fiji military spokesperson told a briefing in Suva.

Waves reaching up to 15 metres hit the outer Ha'apia island group, destroying all of the houses on the island of Mango, as well as the west coast of Tonga's main island, Tongatapu, the prime minister's office said.

On the west coast of Tongatapu, residents were being moved to evacuation centres as 56 houses were destroyed or seriously damaged on that coast.

New Zealand said power has now been restored, and cleanup and damage assessments were going on and Tongan authorities were distributing relief supplies.

The Asian Development Bank was discussing with Tonga whether it would declare a state of emergency to draw on a $10 million disaster funding facility, senior bank official Emma Veve told Reuters.

That would allow a 2G connection to be established but the connection is patchy and amounts to about 10% of usual capacity,

US cable company SubCom has advised it will take at least four weeks for Tonga's cable be repaired, it added.

Tongan communities abroad have posted images from families on Facebook, giving a glimpse of the devastation, with homes reduced to rubble, fallen trees, cracked roads and sidewalks and everything coated with grey ash.

Aid agencies, including the United Nations, are preparing to send relief flights to Tonga but without personnel who disembark to avoid introducing the coronavirus, Veitch said.

Tonga is one of the few countries that is Covid-19 free and an outbreak there would disastrous, he said.

“They've been very cautious about opening their borders like many Pacific islands, and that's because of the history of disease outbreaks in the Pacific which has wiped out societies here,” Veitch told a briefing.

Tonga reliant on Reliance to reconnect it with the world

An undersea cable fault has brought down its communications network, with a repair dependent on a special ship
World
5 months ago

The affect of the huge eruption was felt as far away as the US. Two people drowned off a beach in Peru due to high waves caused by the tsunami, while ...
News
5 months ago

Australia's Minister for the Pacific Zed Seselja said initial reports suggested no mass casualties from Saturday's eruption and tsunami but ...
News
5 months ago