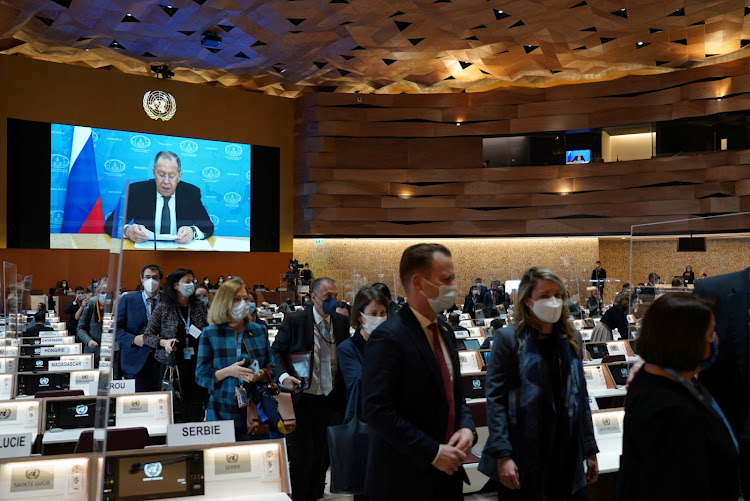 Denmark's foreign minister Jeppe Kofod walks out with other ambassadors and diplomats while Russian foreign minister Sergei Lavrov's (on screen) pre-recorded video message is played at the 49th session of the UN Human Rights Council at the European headquarters of the UN in Geneva, Switzerland on March 1 2022.
Image: Image supplied to REUTERS

Diplomats from many countries got up and walked out of the room when he spoke. According to Euro News, this happened on two occasions.

After the walk out, one diplomat told Reuters the UN needed to take a strong stance.

Lavrov has sought to explain the Russian assault on Ukraine by claiming the country was defending itself from nuclear attack.

“Ukraine has Soviet technologies and the means of delivery of such weapons. We cannot fail to respond to this real danger. Russia is a responsible member of the international community,” he said.

The actor, 61, eventually “made it out of Ukraine safely”, his spokesperson said.
Lifestyle
2 months ago

Ukraine wins the social media war one TikTok at a time

TimesLIVE video has collected some of the latest videos of the Russia-Ukraine conflict.
News
2 months ago