A day after Ngubane quits, mystery unfolds about him and a planned Gupta oil trip 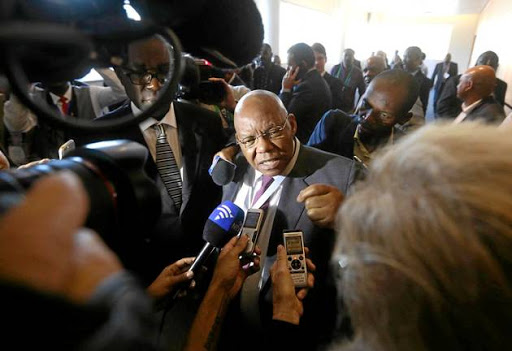 BAFFLED: Former Eskom board chairman Ben Ngubane, who says he is as puzzled as anyone about how his passport ended up being sent to the Guptas.
Image: ESA ALEXANDER

As Ben Ngubane controversially resigned his Eskom board chairmanship, another mysterious link to him and the Gupta family has emerged.

The Times has found within the Gupta e-mail leaks evidence that his passport was forwarded to Rajesh "Tony" Gupta in October 2013, along with quotes for a charter flight to travel to the Central African Republic (CAR).

The flight was for members of Ngubane's company - Gade Oil and Gas - who were, they have confirmed, at the time investigating a huge oil and gas deal there.

'Why I resigned' - Ben Ngubane says he has nothing to fear

Former Eskom board chairman Ben Ngubane says he has resigned for personal reasons and not because he's running away from links to the Gupta family or ...
Politics
4 years ago

The deal, Ngubane said yesterday, could have seen him and his business partner, Salim Essa, earn an estimated R6-billion.

Essa is one of the Guptas' closest business associates. He and Ngubane established Gade Oil and Gas together.

The proposed deal, reported on by The Times when the Gupta e-mails first leaked, has been dogged by accusations of bribes being asked for, but no evidence that they were paid.

Last month Ngubane denied any association with the deal

Yesterday, he said he had no idea how his passport had ended up with Rajesh Gupta.

E-mails show that it was sent by Gupta associate Iqbal Sharma, which Sharma confirmed yesterday.

Late on Monday, in a surprise move, Ngubane tendered his resignation from the Eskom board, igniting speculation that the Gupta-linked network may be starting to crumble.

But Ngubane told The Times his resignation was for personal reasons and not because of disclosures around the CAR deal or the looming parliamentary inquiry into Eskom's controversies.

The Times earlier reported that the intended deal would have been with the regime of the country's then new president Michel Djotodia, whose Séléka rebel forces had only months earlier killed 15 South African soldiers while overthrowing the previous government.

Ben Ngubane resigns as Eskom's chairperson of the board

At the time, Ngubane's spokesman Khulani Qoma said Gade Oil and Gas had refused to pay any bribes when incentive fees were demanded for meetings with senior government officials.

But the discovery of Ngubane's passport e-mail raises new questions over exactly what was going on between Gade, the Guptas, the CAR government and international oil and gas traders from the US and India.

Ngubane yesterday told The Times that Gade had never functioned or traded in the CAR because of the chaos at the time. He said he was an ambassador when the idea for the company arose.

"The company was to explore oil and gas opportunities in Africa. It was very professional. We had friends from West Africa encouraging us to invest in the continent.

"People forget that in South Africa there are very few small business sectors, so when you meet people who encourage you, you investigate these opportunities.''

Ngubane said they had intended going to the Central African Republic but never did because of the fighting.

Asked how a copy of his passport had ended up with Rajesh Gupta on October 8 2013, he said Essa had possibly sent it.

When told by The Times that the fighting had ended when his passport was forwarded to the Guptas, Ngubane said: "There is something funny going on.

"Unless someone used my passport fraudulently I never flew there."

He said he had no relationship with the Guptas.

"You meet people and they talk to you, but that does not mean you have a relationship. It's business and that's where it ends."

Ngubane said at the time he had seen himself as "opening opportunities for myself and Essa".

He said they were in the process of finding international partners to secure the licence for the block which they intended selling for R6-billion.

He said while Eskom board chairman he had declared Gade Holdings, but not its subsidiaries, including Gade Oil and Gas.

"That's where the mistake was made. It did not cross my mind that it was on the companies records system. It was a pure error on my part."

Ngubane said if former public protector Thuli Madonsela had given him an opportunity to explain himself for her State of Capture report, he would have told her that this was a simple "oversight".

"This was a simple slip which happens a lot. There is nothing sinister about Gade."

He had asked for the company to be deregistered.

He insisted he had resigned from Eskom for personal reasons, not because of these disclosures or others.

"This [my resignation] is what people have wanted. They should be celebrating not questioning why I have resigned."

Sharma confirmed to The Times that Ngubane's company was looking to get into the Central African Republic oil business through a US mineral resources company.

"The US owner asked for access to CAR. In that context Tony [Rajesh Gupta] introduced me to a Cape Town business who said he had the CAR government's mandate.

"In pursuit of a certain oil block the idea was to set up a company, which was the shelf company Gade Oil and Gas, which would get it. In the context of the proposal Ngubane was made chairman of the company.

"Arrangements were made to travel to CAR, but nothing ever happened. Attempts were made by the Cape Town businessman to extract money for a meeting with the CAR government, but these meetings did not occur. They were trying to enrich themselves."

Zukiswa Rantho, chief whip for an ANC study group on public enterprises, reacting to Ngubane's resignation, said: "The timing and rationale is surprising and suspect."