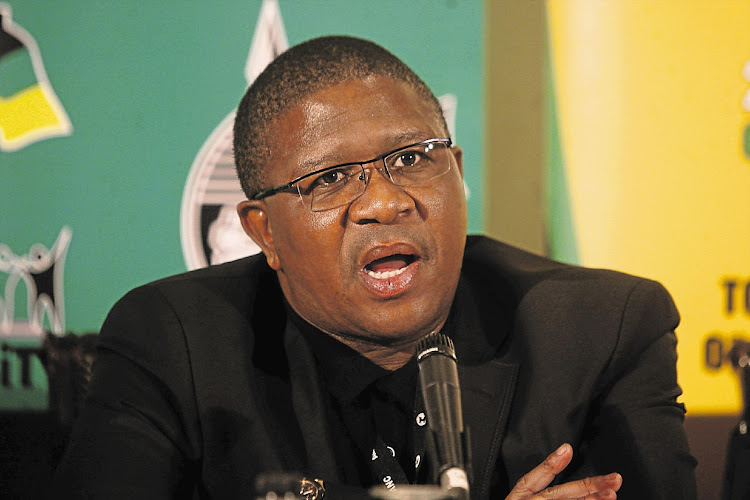 Police minister Fikile Mbalula has hit out at “hood rat racists” who he says “hijacked a serious civil topic for a political agenda” during this week’s Black Monday protests.

Speaking in Parliament during a debate on crime‚ Mbalula said that “all murders matter” and condemned the “lawlessness and racist insurgency” at the protests.

Mbalula highlighted that over 19‚000 people had been murdered in the last year‚ many in crime hotspots like Khayelitsha‚ Nyanga and Ravensmead. In all of those areas‚ he said‚ poverty played a role in crime levels.

Just 74 of the 19‚015 murders had been committed on farms and “some of which were committed by those black shirts”‚ he said.

What happens now that the #BlackMonday protest marches are over and two-toned khaki resumes being the colour of choice for white farmers?
Opinion & Analysis
4 years ago

The minister acknowledged that rural safety was a “serious security issue” but said this was being attended to‚ working with organised farmers.

Mbalula called on farmers to stop employing illegal immigrants and to abide by labour laws so that their workers did not “turn on them”.

Mbalula highlighted the country’s deeply divided past and said “the racial superiority protest yesterday betrays the reconciliatory hand of the majority of our people”.

He called on all parties in the house to work towards a common purpose and focus on the social ills like poverty‚ and alcohol and drug abuse to fight crime.

The African National Congress (ANC) has condemned the display of the apartheid South African flag during nationwide protests against farm murders on ...
Politics
4 years ago

"I feel so powerless, I wish I could do something for the country's farmers ... It's only when you create chaos that you are heard."
Ideas
4 years ago

Farmer 'surprised' by all the support, condemns use of old SA flag

Boland farmer Chris Loubser, whose a plea for action on Facebook sparked Monday's nationwide protest against farm murders, says he was surprised by ...
News
4 years ago