EFF, Not in My Name slam Manana sentence but NPA says it is satisfied 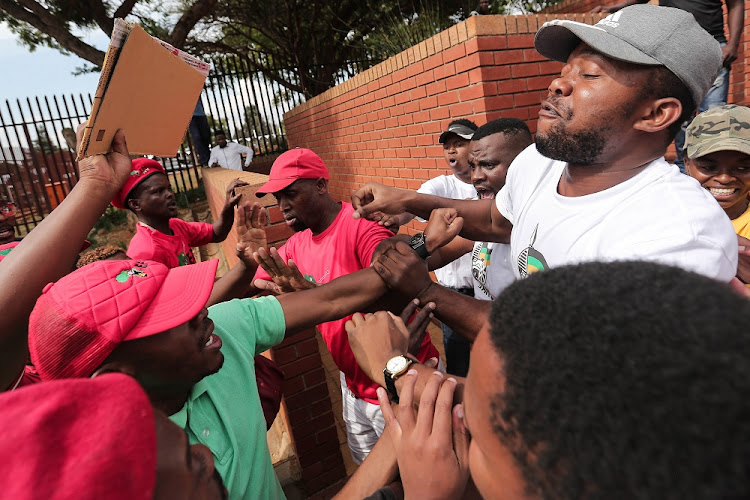 Members of the EFF clash with a members of the ANC after an ANC member provoked the group outside the Randburg Magistrate’s court in Johannesburg after the Magistrate ordered that former Deputy Higher Education Minister Mduduzi Manana is fined R100 000 and to pay R5000 and R20000 to his victims and does 500 hours community service. Manana was filmed assaulting two woman and pleaded guilty to the offence.
Image: Alaister Russell/The Times

This follows the judgment handed down on Monday by Magistrate Ramsamy Reddy‚ who sentenced Manana to a fine of R100‚000‚ or 12 months in prison.

He was also ordered to pay compensation to his three victims‚ and to perform 500 hours of community service. He must report at 8am for his rehabilitation programme‚ which commences on Tuesday.

"We are exploring opportunities with a legal team... to review this sentence‚ because we believe that it's a crime against women. This sentence needs to be reviewed‚ and the message of jubilation which Mduduzi Manana continues to send out to society must be stopped by the ANC‚ if they have any morality left‚" said EFF acting Gauteng chairperson Mandisa Mashego.

Mashego added that the ANC should condemn the behaviour of their supporters‚ rather than continue to protect convicted members of their party whenever they face charges.

The secretary-general of Not In My Name‚ Themba Masango‚ echoed Mashego's sentiments‚ and said it was very disappointing to hear the magistrate hand down what he calls a “light” sentence for Manana.

"We were hoping for a direct imprisonment – however‚ this is South Africa. We know that if you are politically connected and you have money‚ there is no way that you are going to see a jail cell. It is painful that wealthy men are going to feel that it's their right to be able to beat up women and not see justice done‚" said Masango outside the court.

He also condemned the behaviour of a group of ANC supporters‚ mostly university students‚ who were clad in party regalia and chanting pro-Manana songs both in and outside the courtroom.

"This renting of crowds of young people who are supposed to be writing at school... the ANC should really do something about it‚ if they call themselves leaders of society. If this is what they are bringing to court... if this man [Manana] is one to be celebrated‚ civil society and South Africans will remember this in 2019‚" said Mashego.

After the sentencing‚ a scuffle broke out outside court between EFF and ANC supporters‚ after an ANC member walked into an EFF circle holding a placard.

Manana‚ who has two previous theft convictions‚ faced three counts of assault with intent to cause grievous bodily harm. He admitted to attacking three women at a restaurant in Fourways‚ north of Johannesburg. He pleaded guilty to all charges on 7 September.

Convicted former deputy minister of higher education Mduduzi Manana must pay a fine of R100‚000 in addition to reporting for community service at 8am ...
News
3 years ago

Manana’s co-accused‚ Cyril Madonsela‚ 35‚ and Thulani Mdaka‚ 30‚ will be sentenced on Tuesday. They both faced the same charges as Manana.

The National Prosecuting Authority’s Phindi Mjonondwana welcomed the sentence handed down by Reddy‚ saying it was fair.

"What people need to understand is that in any court‚ before any sentence is passed‚ there are a lot of factors that are considered‚" Mjonondwana told TimesLIVE. “The circumstances and the severity of the crime... need to be considered‚ as well as the personal circumstances of the accused.

South Africa's national cabinet includes thieves, or rather, it did until recently contain at least one.
Ideas
3 years ago

The court sent an appropriate message... that violence against women will never be tolerated‚" she said.

The NPA said that what also contributed to Manana's sentence is the fact that he didn't waste the court's time – he pleaded guilty‚ and showed remorse for his actions.