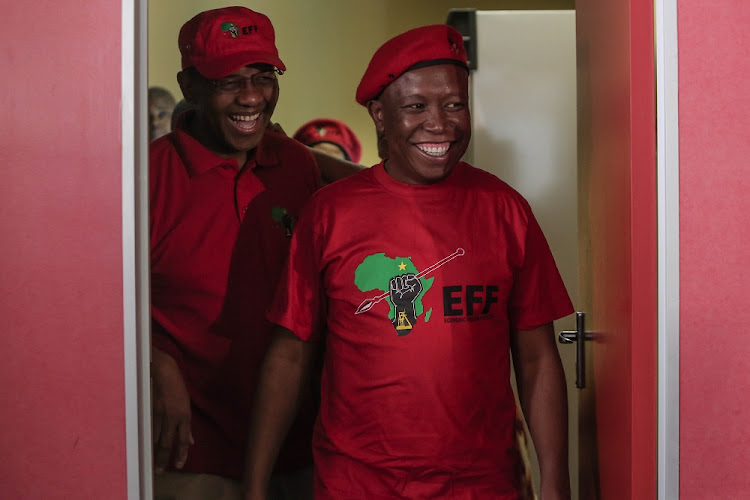 EFF leader Julius Malema once seen as an ally of Mugabe's signalled a growing distance between them.
Image: Alaister Russell

It is high time that Zimbabwe transitions to a post-Mugabe era‚ the Economic Freedom Fighters said on Wednesday.

"The EFF is of a strong belief and view that President Robert Mugabe must hand over political power to the next generation and should not allow his name to be used for the further degeneration of a country he led to political liberation.

"...We call on the South African government to prepare to welcome President Mugabe for political asylum. He must be allowed to come to South Africa so that a peaceful transition can indeed take place."

Commenting on the military lockdown of Harare today‚ which comes after the arrest of three Zimbabwean cabinet ministers believed to be in the camp loyal to first lady Grace Mugabe‚ the EFF said: "Following the reality that all else has failed in realizing a post-Mugabe era‚ the Zimbabwe Defence Force is within its rights to protect Zimbabwe from factions that are opportunistically using Zimbabwe for self-enrichment to the total disregard of the rule of law."

"The ZDF should make sure that there is no loss of life during the transition‚ but should decisively suppress agent provocateurs who will try to undermine the long overdue transition.

"We must do this to aid peace allowing Zimbabweans to immediately stabilise their country and institutions for the sustainable civilian rule and a better future.

"The ZDF should‚ therefore‚ be encouraged and allowed to lead a non-violent transition which will culminate in free‚ fair and democratic elections‚ and which will in the process respect the autonomy of the judiciary."

The EFF said change was overdue in the neighbouring country.

"Zimbabwe has experienced a lot of pain and destabilization over of the past two decades‚ lost its currency and displaced millions of its citizens due to economic hardships.

"The EFF appreciates that some of the pain caused in Zimbabwe was due to imperialist actions‚ but a significant component of this was self-inflicted. President Mugabe cannot insist on remaining in power even when he is physically incapable of doing so."

In a pinned tweet from November 9‚ EFF leader Julius Malema - once seen as an ally of Mugabe's - signalled a growing distance between them.

Malema tweeted: "I like #PresidentMugabe for his contribution towards (the) African revolution but his overstay is destroying his legacy. A good leader should have produced 2nd & 3rd layer leadership to continue the good fight against imperialism. Zimbabweans should remove him & reclaim their country."

A lobby group has warned that Zimbabwe is far behind in its preparations for next year's elections.
News
4 years ago