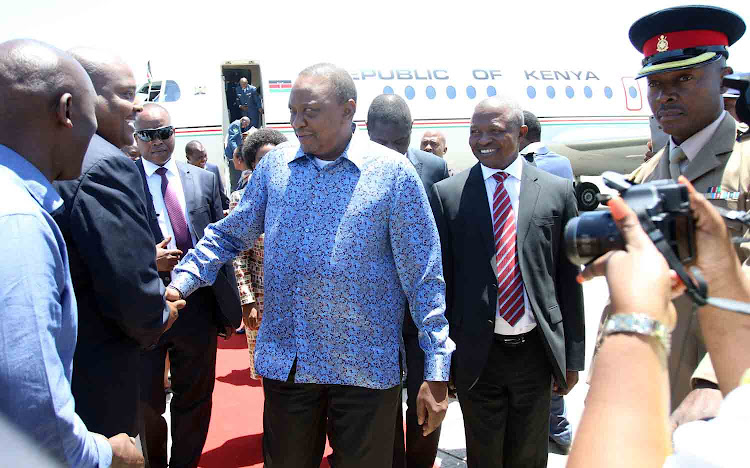 Speaking to the media after a meeting between the two in East London‚ ahead of the ANC’s 106th birthday rally‚ Kenyatta said he wished Ramaphosa and the newly elected ANC leadership well.

“We must also say that we did mention and congratulate him for the unity message to bring people together. It’s a message that resonates well not only with South Africans but [also] to the rest of us in our political parties in the rest of Africa‚” he said.

Kenyatta arrived in East London on Friday morning‚ after having being hosted for a working visit by President Jacob Zuma in Durban a day before.

Kenya’s President Uhuru Kenyatta has arrived in East London to attend the ANC’s 106th anniversary at the Buffalo City Stadium on Saturday.
News
3 years ago

Since becoming ANC president in December‚ Ramaphosa has preached unity in the party‚ constantly saying that competing factions before the December conference should now come together.

“As I told my brother [Ramaphosa]‚ we have a lot to learn from a party that has held together for 106 years and have been involved in the struggle of South Africa and Africa‚” Kenyatta said.

Ramaphosa told the media that Kenyatta would attend the ANC’s gala dinner on Friday evening and the rally the next day.

“We are very pleased that President Kenyatta found time to come to South Africa as we celebrate our 106-year birthday‚” he said.

Ramaphosa said his talk with Kenyatta focused on the bilateral relationship between the South Africa and Kenya‚ agreeing that new and strategic partnerships need to be developed.

So what will Cyril say during his maiden speech?

All eyes will be on the Buffalo City stadium in East London on Saturday where ANC president Cyril Ramaphosa is to deliver his maiden speech as party ...
Politics
3 years ago

“We also discussed how we can exploit the natural resources of our continent. We have great opportunities on renewable energy‚ on mining and a number of resources. Our talks were quite extensive. We would be seeking new pathways to mine and develop areas where we can work together with our people. All this must be done in a smart partnership‚” Ramaphosa said.

Kenyatta told the press that there was an understanding that both countries’ future in Africa was “tied at the hip”.