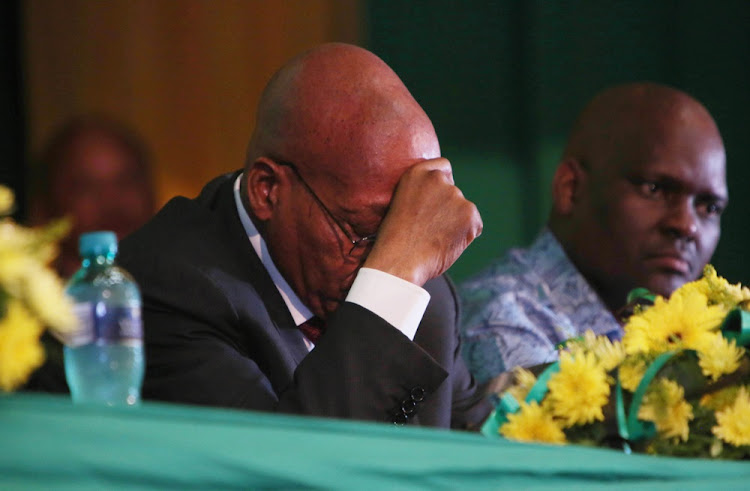 Former president Jacob Zuma is set to face the music —  soon he will be charged with the arms-deal corruption case and he might face ill-discipline charges by his party.

The Sunday Times can reveal that the National Prosecuting Authority  is going to recommend  that some of the charges against Zuma be reinstated, having  lined up more than 200 witnesses to testify against him.

Zuma — who stepped down this week following a scandal-ridden presidency of nine years —  is likely to face 18 main charges of  racketeering, corruption, money laundering, tax evasion and fraud  related to the arms-deal corruption  involving his former financial adviser Schabir Shaik.

On Tuesday NPA boss Shaun Abrahams said he would announce his decision on whether Zuma will be charged after receiving recommendations from his team.

The Sunday Times has, however, learnt that the NPA team would recommend that Zuma be charged — this is set to happen in the next few weeks.

'Tired' Dlamini-Zuma wants out of Parliament

"Zuma is going to have his day in court soon and it's going to be ugly," an NPA source said this week.

Compounding Zuma’s woes were new indications that he could face disciplinary action by  the ANC, angered at his  noncompliance with a national executive committee order to step down — going on SABC TV  to say he “disagreed” with the NEC decision, only to announce later that  night that he would indeed quit office.

The move is likely to be rejected by President Cyril Ramaphosa as it could plunge the party into a deeper crisis, with  Zuma’s supporters  likely to revolt against any action against him.

Charging Zuma could lead to a possible split a year before general elections as there are already murmurings of plans of a breakaway in his home province of KwaZulu-Natal. It could also bolster Zuma’s claims that he is being treated unfairly and that  there is a conspiracy against him.

His detractors are furious about his comments during  the SABC interview that the  decision to recall him was unfair because the party had failed to provide him with an explanation of what he had done wrong.

Zuma claimed that Ramaphosa  had agreed to his proposal that he only vacate his position after three months. He questioned why his removal was being fast-tracked.

“Zuma was out of order. We have decided that he is going to be disciplined,” said an ANC leader.

Duduzane Zuma and the Hawks: a case of sink or sing

Former president Jacob Zuma’s son  Duduzane tried to strike a deal with law enforcement agencies before going on the run this week.
News
3 years ago

The stakes for the capture of fugitive Ajay Gupta have been raised‚ with South African billionaire Magda Wierzycka upping the bounty on his head.
News
3 years ago

Newly elected President Cyril Ramaphosa made many promises in his state of the nation address on Friday.
Politics
3 years ago