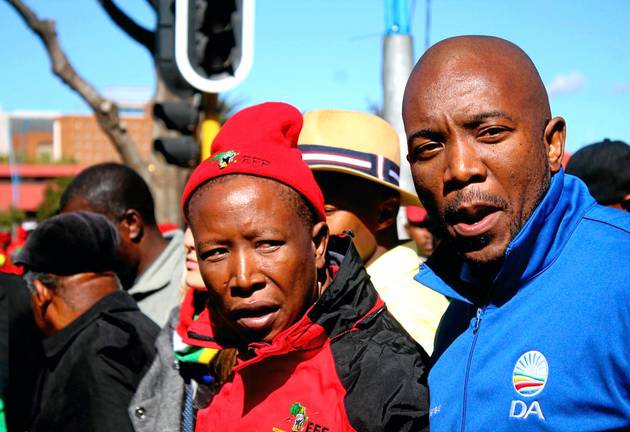 Government's plans to expropriate land without compensation has pitted the EFF and the DA against each other in parliament‚ threatening an alliance pact at municipal level.

The divisions between the two parties emerged on Monday morning during the parliamentary debate on President Cyril Ramaphosa's state of the nation address‚ which he delivered on Friday night.

Speaking during the debate‚ DA leader Mmusi Maimane suggested that expropriation of land without compensation was at odds with the constitutionally enshrined rights to private property ownership‚ while EFF leader Julius Malema said Maimane's view could put their municipal cooperation at risk of collapse.

Ramaphosa on Friday announced that government would this year be implementing the policy of land expropriation without compensation following the adoption of such a resolution by the governing ANC at its national conference in December last year.

But Maimane has urged Ramaphosa to reconsider government's new policy on fast-tracking land reform‚ saying there were different ways of tackling the issue.

"We can speed up land reform by rooting out corruption and inefficiency. We can have a thriving‚ growing‚ diverse agricultural sector whose wonderful produce fills the shelves all over the world‚" Maimane said.

"But we absolutely cannot have this if farmers do not know if or when their land will be taken from them without any compensation. Expropriation of land without compensation is incompatible with a growing‚ flourishing economy. You can have one or the other‚ but never both."

Maimane's stance on the matter drew an angry response from Malema‚ who warned that the DA's position on land could put their alliance in various metro municipalities in jeopardy.

The government will implement the expropriation of land without compensation.
Politics
3 years ago

The DA is governing the municipalities of Tshwane‚ Johannesburg and Nelson Mandela Bay through the support of the EFF.

"I want to warn him‚ the leader of the opposition‚ that your stay in the metros is going to depend on your attitude on the expropriation of land without compensation‚" said Malema to loud cheers from EFF MPs.

"I want to warn him about that. That's the fundamental issue which is going to make us fight with you because anybody who's opposed to expropriation of land without compensation is the enemy of our people and such a person will be dealt with."

Differences on the land issue aside‚ both Maimane and Malema called on Ramaphosa to fire ministers such as Faith Muthambi‚ Bathabile Dlamini‚ Bongani Bongo and Des Van Royen among others.

Leader of the EFF Julius Malema called on South Africans to learn from the mistakes of Zimbabwe. He also said the EFF would give President Ramaphosa a chance.

Translating Sona: How the middle finger was displaced by a thumbs-up

Translating this year’s state of the nation address was a breeze‚ says the sign language expert who went viral after showing the middle finger at ...
Politics
3 years ago

The Chamber of Mines has agreed jointly with the Department of Mineral Resources (DMR) to postpone its court application over the Reviewed Mining ...
Politics
3 years ago

ANC branch leaders in KwaZulu-Natal have expressed their unhappiness over the decision to recall former president Jacob Zuma.
Politics
3 years ago

Ramaphosa must rid Cabinet of those who propped up Zuma: Maimane

President Cyril Ramaphosa should demonstrate his commitment to what he said on Friday night during his state of the nation address by getting rid of ...
Politics
3 years ago

President Cyril Ramaphosa may spring a few surprises in his new cabinet‚ according to political analyst Dumisani Hlophe.
Politics
3 years ago