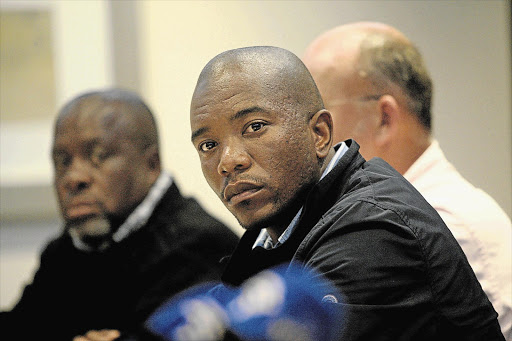 The country faces further risks of load-shedding by Eskom unless its monopoly over energy generation is broken and a greater role is given to independent power producers.

This is the view of DA leader Mmusi Maimane and the party’s spokeswoman on public enterprises‚ Natasha Mazzone‚ who held a media briefing on Monday to discuss the crisis at the utility.

Eskom has warned that there is a risk of load-shedding over the next 10 days as it ramps up operations after last week’s strike over wages.

"Although the current load-shedding has been exacerbated by the industrial action‚ the reality is that the years of mismanagement at Eskom lies at the root of this crisis‚" Maimane said.

"Load-shedding is the direct result of state capture. For years‚ under the watchful eye of the ANC‚ ineffective executives streamlined dodgy contracts for the benefit of the Gupta family.

"Instead of bringing about tangible change at Eskom‚ we have seen the power utility stumble from one crisis to another. The ANC has used Eskom as its own cash cow. Bloating the middle management from 80 to over 400 people."

Maimane argued that cities had to drive economic development and energy generation‚ as the DA-controlled city of Cape Town had done through its investment in the Steenbras hydroelectric power scheme and its encouragement of independent power producers (IPPs).

There is a low probability of rotational load-shedding during the day but that could change when electricity demand ramps up between 5pm and 9pm on ...
News
4 years ago

Energy expert Chris Yelland says government has to fix the real problems at Eskom‚ not just throw money at the parastatal.
Business Times
4 years ago

This had reduced the impact of Eskom load-shedding on residents.

"The City of Cape Town wants 20% of its energy from renewable resources by 2020‚ by buying directly from IPPs‚" Maimane said. "This model of IPPs supplying electricity directly to the grid needs to be replicated across the country in order to improve the competitiveness of this sector."

He said the Cape Town city council and US Trade and Development Agency had signed a R12.7-million grant agreement for a gas distribution network feasibility study of the use of natural gas in the city.

Mazzone said the DA was working on a private member’s bill which would propose to break Eskom’s monopoly and make the energy sector more competitive.

"With more than 47‚000 employees‚ earning an average R662‚282 a year‚ Eskom is a bloated dinosaur‚ compared with its African counterparts. A World Bank assessment of African utilities benchmarked the number of employees at 14‚200 at other utilities‚" she said.

Eskom is once again implementing load shedding, which means that parts of South Africa may be without electricity from time to time. What exactly is going on at the power utility and what led to load shedding being implemented again?

South Africans were spared rotational loadshedding on Sunday‚ but Eskom advises the power system will take up to 10 days to recover from the effects ...
News
4 years ago

Eskom’s 0% salary increase is 'off the table': Gordhan

Public enterprises minister Pravin Gordhan said on Friday night that the proposed Eskom salary freeze was no longer an option.
News
4 years ago