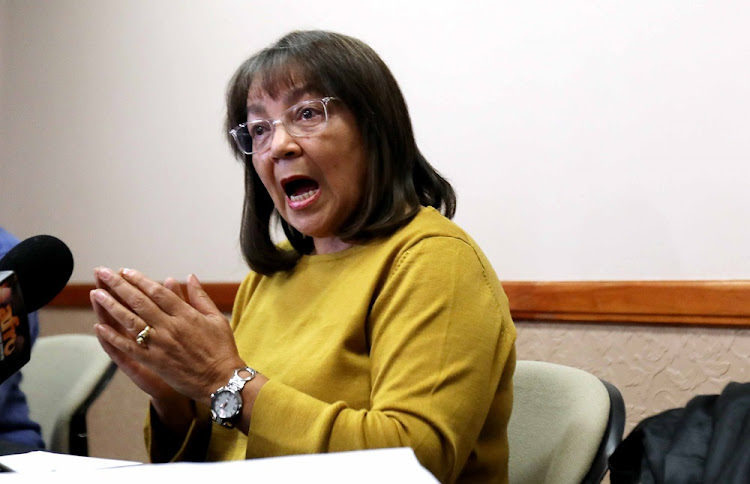 Patricia de Lille said law firm Bowman published two reports‚ one clearing her of wrongdoing and the other calling for criminal charges and internal disciplinary steps against her.
Image: Esa Alexander/Sunday Times

Cape Town Mayor Patricia de Lille has indicated that she may not leave her office on Wednesday as was announced earlier this year.

Instead‚ she said she was heading back to the courts in an attempt to set aside two forensic reports which were adopted by the city council last week – one of which recommended criminal charges against her.

“Unfortunately I am going back to court and I want to go to court before Wednesday to try and review and to set aside this report. That is where I am. I am taking it one day at a time‚ because a day in politics is a very long time.

“So‚ if anyone of you asks me‚ ‘Are you going to resign on the 31st or are you not going to resign?’‚ I am going to tell you to wait for the 31st because it's is not the 31st. My focus is now on clearing my name and I think I need to be respected for that because we believe in the rule of law‚” she said on Monday.

De Lille was addressing the Cape Town Press Club when she revealed that she would “fight to the bitter end” to clear her name.

Will Patricia de Lille be (un)chained? Mayor wants the courts to decide

Dan Plato, the DA’s choice for mayor of Cape Town, may have to wait a bit longer to wear the mayoral chain, with incumbent Patricia de Lille set to ...
Politics
3 years ago

“October 31 is on Wednesday…but where my emphasis is right now is that I have to clear my name again‚ like I have cleared it in all of these other instances. So I am consulting with my lawyers.”

In August‚ Democratic Alliance leader Mmusi Maimane announced De Lille's resignation as Cape Town mayor. At the time he said the party had reached an agreement with the mayor‚ with whom it had been at loggerheads for months. It also dropped internal disciplinary processes against her.

De Lille explained on Monday that when she decided she would vacate her office at the end of October it was because they were expecting the law firm Bowman to publish its report on her at the same time. She had also taken the decision to move on because she was tired of fighting “novice politicians - politicians who are just hardly out of the crèche”.

De Lille said the law firm instead published two reports‚ one clearing her of wrongdoing and the other calling for criminal charges and internal disciplinary steps against her.

She revealed that she had‚ in fact‚ started preparations for leaving office by‚ among other things‚ having hand-over meetings with Dan Plato‚ the man the DA has designated to take over from her.

Patricia de Lille will be reported to the police‚ the City of Cape Town council decided on Thursday.
Politics
3 years ago

De Lille further added that she only discovered later that Bowman's brief had been extended in August – at an extra cost of R822‚000‚ which was paid to the company through a deviation under special circumstances. But this time around the city had appointed Bowman’s Johannesburg office to investigate her.

She also claimed that the DA received a copy of the damning report on Tuesday and issued a press statement despite the report being confidential and before it was sent to the city council on Thursday.

De Lille said her problems with certain individuals in the DA started in 2016 when‚ after winning a 66.6% majority after the Local Government Elections‚ she had to appoint people to executive positions.

“Everybody wanted an executive position. It really started there…and the next thing what took it further is when Alderman JP Smith publicly accused me [saying] that there was wrongdoing with upgrades at my house.

“I was bashed in the media for two weeks. The party didn't come to my rescue.

“That's where the thing started when JP Smith accused me of using city-owned money‚” she said.

Patricia de Lille takes aim at her enemies‚ but is it her last hurrah?

Patricia de Lille pulled no punches on Thursday‚ telling her last meeting of Cape Town city council as mayor that she would lay criminal charges ...
Politics
3 years ago

She claimed that even when a city-commissioned report cleared her‚ it was suppressed by the DA‚ and blocked from being brought to the council.

“It's not the DA‚ it's certain individuals in the DA that are hell-bent on getting rid of me‚” she said.

Earlier‚ Maimane told journalists during a separate briefing in Parliament that he had received De Lille's signed resignation letter and expected her to leave office on Wednesday.

He also indicated that he was going to court to fight the five former DA councillors who want him to apologise for his claim that they were implicated in the Bowman reports.

Seven days before her resignation as mayor of Cape Town is due to take effect‚ Patricia de Lille is expected to clarify her future on Wednesday.
Politics
3 years ago

“Let me leave it at that because people like to claim all sorts of things without any evidence and‚ therefore‚ I want our legal department to deal with them‚” he said.

He added that he didn't understand how “somebody wants to resign on the back of the tabled report of Bowman”.

“Let's not talk about any other things. There is a report that finds challenges in a municipality and now people want to resign. They must be running away from something. Let me leave it at that. My lawyers will deal with that‚" charged Maimane.