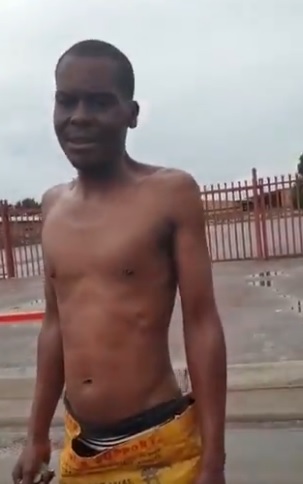 Charlie Mabuza says he was stripped of his security guard uniform after being caught sleeping and smelling of booze on the job.
Image: Solomon Phiri via Twitter

Residents of Bronkhorstspruit in Gauteng are threatening to bring the town to a standstill on Tuesday.

They are protesting after a security guard was allegedly forced to strip down to his underwear and walk 3km in the rain.

Residents were angered after a video surfaced on social media last week of Charlie Mabuza, 36, walking around town with a yellow rubbish bag wrapped around his waist, the Sowetan newspaper reports.

Mandlakayise Mahlangu from the ANC Youth League said a march has been organised.

They are demanding that businesses who have contracted the security company Mabuza worked for must terminate their contracts.

Mabuza told Sowetan that he was left humiliated after his supervisor instructed him to take off his uniform before firing him and kicking him off the office premises on New Year’s Day.

He said this was after he was found to have been sleeping and smelling like liquor while on duty.

Police spokesperson Captain Kay Makhubela said they were investigating the circumstances around the guard's treatment.

'Don’t light up a joint too soon, thinking you can’t get fired,' one legal expert says
News
2 years ago

A British Airways pilot who lives in Cape Town has been jailed in the UK after arriving drunk to fly 300 passengers to Mauritius.
News
3 years ago

Over a decade after a drunk judge‚ Nkola Motata‚ was recorded swearing at onlookers after he crashed his Jaguar into a wall‚ a Judicial Service ...
News
3 years ago