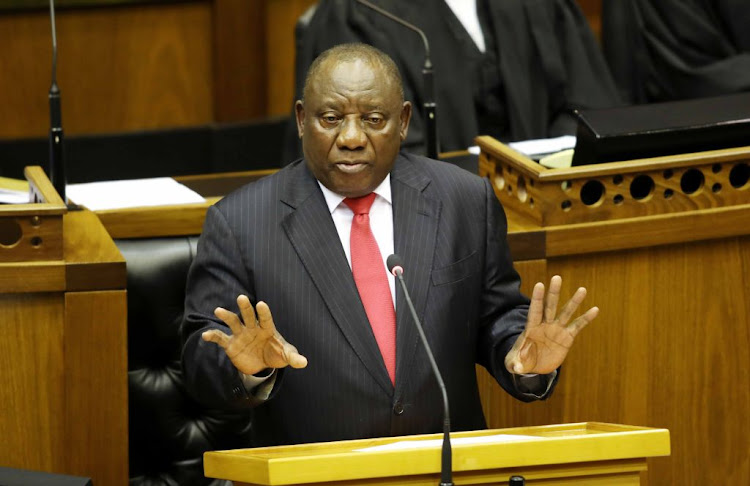 President Cyril Ramaphosa says neither restructuring, nor refinancing, nor cost cutting, nor tariff increases, nor better plant maintenance on their own will save Eskom.
Image: ESA ALEXANDER/SUNDAY TIMES

President Cyril Ramaphosa has stuck to his guns on the unbundling of Eskom, saying "a unitary Eskom has proven to be difficult to lead".

In his reply to the state of the nation address debate on Thursday, Ramaphosa hit out at what he said were reckless claims and political posturing around the unbundling of the parastatal, saying there were "sound, valid and compelling reasons to separate Eskom into different entities".

The president insisted that unbundling Eskom was the best option on the table for now - and that it was not a path to privatisation.

President Cyril Ramaphosa responded to MPs in parliament on February 14 2019 after concerns were raised in a two-day debate on his state of the nation address speech last week. Here are some highlights from his response.

"Ultimately, the restructuring of Eskom is intended to ensure security of electricity supply for the country, which is critical to building up the positive investor sentiment and confidence essential for the investment required..." Ramaphosa said.

He said finance minister Tito Mboweni would announce measures the government would undertake to help Eskom stabilise its finances, and added that costs had to be cut at the utility.

"Financially, the reference to cost-cutting should be understood not to mean retrenchments. The preferred strategy in reducing human resources costs will be to offer voluntary packages to staff," Ramaphosa said.

He also took a punch at Eskom’s cost structure, saying it had anomalies that required urgent attention if it wanted to be sustainable.

"We further need to look at the benefits and perks received by Eskom staff including those offered through Eskom Finance Company (EFC) and we need to jointly ask ourselves whether it makes sense for Eskom to have this business unit and be offering to its staff below-market-rates finance packages, whose losses are ultimately underwritten by the state," Ramaphosa said.

President Cyril Ramaphosa has denied claims made during the Sona debate that he was a spy in the early 1970s.
Politics
2 years ago

In a thinly veiled message to organised labour, Ramaphosa said the idea that the only way out was through bitter confrontation and conflict should be rejected.

"Our challenges will be not be resolved in the streets, but we will gather around the table to find workable solutions," he said to unions and opposition parties who vehemently rejected his announcement in his state of the nation address last week.

The president said the government needed to aggressively intervene to stop load-shedding.

"While restructuring Eskom won’t solve the immediate electricity supply crisis, it will position the company to more effectively meet the country’s energy needs into the future,” Ramaphosa said.

"There is a no single solution to the problems at Eskom – neither restructuring nor refinancing, nor cost cutting, nor tariff increases, nor better plant maintenance on their own will have the necessary effect. We need to pursue all of these measures and more, simultaneously, in a co-ordinated manner, and with purpose, to turn the utility around," he said.

Ramaphosa also announced that he had constituted a special cabinet committee on Eskom which would be led by Deputy President David Mabuza and consist of minister of public enterprises Pravin Gordhan, minister of energy Jeff Radebe, minister of finance Tito Mboweni as well as the ministers of transport, intelligence and police.

He said they would have to be seized with the matter of Eskom every day and provide him with reports daily on what actions needed to be taken to secure energy supply.

Eskom is technically insolvent and at the current trajectory it will not survive beyond April 2019.
Politics
2 years ago

The South African Communist Party (SACP) has laid the blame for the ongoing crisis at Eskom on what they term the "corruption of corporate capture of ...
Politics
2 years ago

Public enterprises minister Pravin Gordhan told parliament on Tuesday that Eskom will appoint a panel of experts to investigate problems at its power ...
News
2 years ago