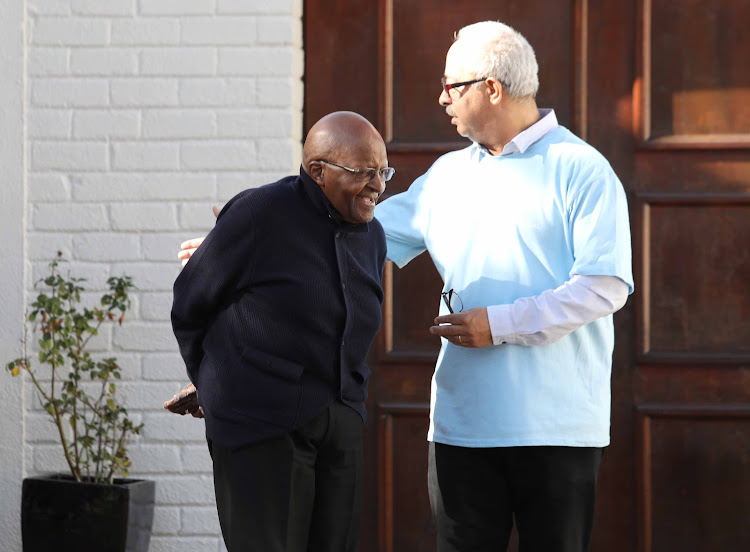 Archbishop Emeritus Desmond Tutu was mum after casting his vote at home in Milnerton, Cape Town, on Monday.

But he appeared to be upbeat and jovial while casting his vote.

Tutu and his wife Leah were among 770,000 voters who are casting special votes on Monday and Tuesday across the country.

Shortly after casting his vote, Tutu walked to the IEC officials outside and thanked them "for coming".

Archbishop Desmond Tutu cast his special vote at his home in Milnerton, Cape Town, on May 6 2019.

He then waved and blew a kiss at journalists gathered outside the gates.

IEC staff had spent just over 20 minutes inside the Tutu residence.

IEC area manager Allan du Plooy told journalists that the Tutus were upbeat during the process of casting their votes.

"The Arch and his wife received us very warmly. They were upbeat about the elections. We went through the process with him and told him what was going to happen exactly from his giving his ID to us.

"We left him for some privacy. He made his mark. He did take a bit of time but he probably decided to vote for somebody else," said Du Plooy. "He was very jovial, his jovial self, and he looks quite healthy," added Du Plooy.

The Tutus have previously voted at the Milnerton High School which is near their home.

With only two days to go before the 2019 national and provincial elections, the electoral commission (IEC) has called for calm to allow voting to ...
News
3 years ago

The country's 2.2 million undecided voters will be swayed by political party and political leader preferences, how those parties plan to solve ...
Politics
3 years ago

About 1% of polling stations will be disrupted on voting day, predicts ISS

As the country prepares to vote on Wednesday, the Institute of Security Studies (ISS) says about 1% of disruptions can be expected at polling ...
Politics
3 years ago