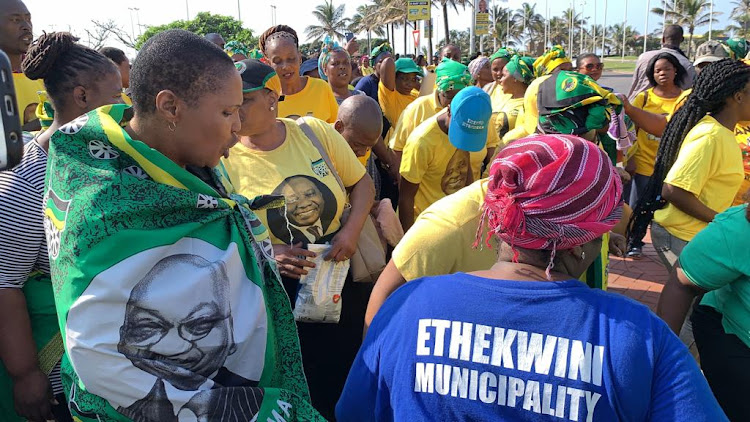 Supporters of Durban mayor Zandile Gumede on the city's beachfront on Friday. They plan to march peacefully to the ANC's provincial office.
Image: Jackie Clausen

"We will defend the mayor," chanted a crowd of supporters who gathered near Durban's North Beach on Friday.

The crowd, mostly in ANC regalia, is expected to make its way to the ANC's provincial office in support of eThekwini mayor Zandile Gumede.

This follows Gumede's court appearance at the Durban Commercial Crime Court on Tuesday. She faces a charge of unduly influencing the awarding of a tender in relation to a R208m Durban Solid Waste (DSW) contract awarded in 2016.

After Gumede handed herself over to the Hawks, the ANC in the province released a statement.

Supporters of Durban Mayor Zandile Gumede gather for a “peaceful march “ in her support after she was arrested earlier this week @TimesLIVE #gumede pic.twitter.com/SMHotFrTk7

"We would like to reiterate our faith in the justice system and hope that this matter will be treated with respect and integrity it deserves," the ANC said in a statement.

The crowd of about 150 people said Gumede was being "politically persecuted".

The SACP in KZN says it had predicted that eThekwini mayor Zandile Gumede would find herself in legal hot water.
Politics
3 years ago