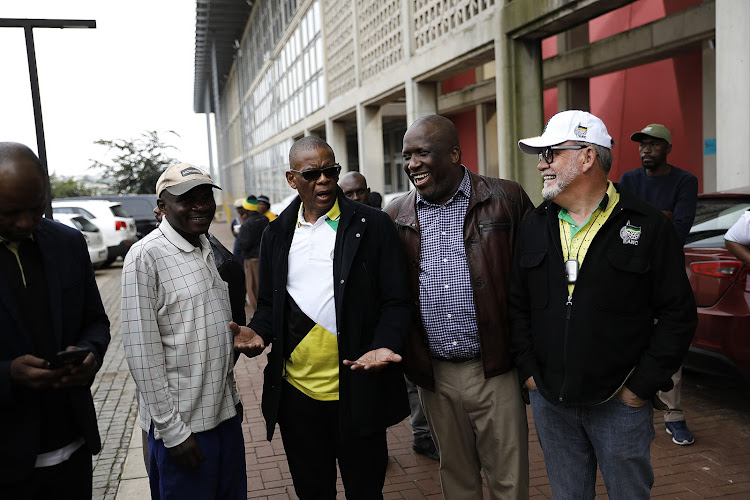 Ace Magashule (with dark glasses) has been accused, along with Jacob Zuma and other senior ANC members, of helping the ATM and other smaller parties contest elections in an attempt to reduce the ANC's majority. File photo
Image: Alon Skuy

ANC lawyers Krish Naidoo and former deputy minister Andries Nel have been tasked with putting together the terms of reference of the party's investigation into allegations that some of its top leaders, including secretary-general Ace Magashule, sabotaged the party by helping set up small parties to challenge the ANC in last month's elections.

News24 reported earlier this week that the ANC's national working committee (NWC) had appointed a panel, that would include former president Kgalema Motlanthe and ANC stalwart Frene Ginwala, to investigate Magashule's alleged involvement in the formation of the African Transformation Movement (ATM) party.

On the eve of the elections, the Sunday Times reported that South African Council of Messianic Churches in Christ general secretary Buyisile Ngqulwana had written a damning affidavit claiming that both Magashule and former president Jacob Zuma were involved in the formation of the ATM.

Ace and the ATM: Mzansi unimpressed Magashule is to be probed by his own party

The ANC’s investigation is one of many as Magashule is facing many other claims of misconduct.
Politics
2 years ago

The decision to probe the allegations was taken at the party's special national executive committee (NEC) two weeks ago.

Insiders said the probe would go beyond Magashule's involvement in ATM and look at other leaders' role in registering and helping other smaller parties contest elections in an attempt to reduce the ANC's majority.

A NWC member who attended the meeting said Motlanthe was appointed because he “does not take nonsense” and “is not afraid of anyone”.

“Motlanthe doesn’t listen to nonsense and is impartial, so he will fully look into this,” an ANC leader with knowledge of the decision told TimesLIVE.

He said the matter was too serious to ignore and an independent panel headed by Motlanthe would adequately appraise whether ANC leaders were involved in forming other political parties.

Motlanthe doesn’t listen to nonsense and is impartial, so he will fully look into this

The move to have Motlanthe look into the matter was first proposed among the ANC's top-six leaders, who were determined not to sweep the accusations under the carpet.

“It's not a matter of whether there’s a reason to believe people were involved. ANC leaders were involved. We want to know the extent of it,” the ANC insider said.

He said there was enough information that warranted a full investigation by Motlanthe’s panel.

“You can’t have ANC leaders undermining the party from within,” the party insider said.

On the radar of this panel is not only whether ANC leaders like Zuma and Magashule supported the formations of these parties but whether they were actively involved in their genesis.

Parties such as Black First Land First, led by Zuma ally Andile Mngxitama, and the African Content Movement, led by former SABC COO Hlaudi Motsoeneng, are expected to be scrutinised.

“The thing about party leaders being involved in ATM is very serious and has to be looked into,” an ANC NEC member added.

He said in an affidavit that those involved in starting ATM had “consultation sessions” with Zuma and Magashule about an alternative party to the Cyril Ramaphosa-led ANC.

ANC deputy secretary-general Jessie Duarte said she had hoped to brief the panel before pronouncing on the matter.

Cyril is in all-out war with the Zuma faction, and he’s losing