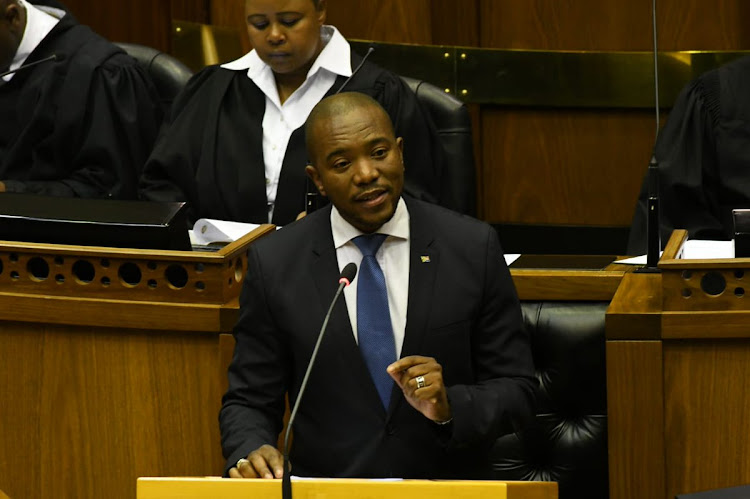 'Giving our children tablets at school is not the fourth industrial revolution, but preparing them for jobs that don’t even exist yet is,' Mmusi Maimane told President Cyril Ramaphosa during the #SonaDebate.
Image: Parliament RSA via Twitter

Speaking in the National Assembly on Tuesday during the debate on Ramaphosa's state of the nation (Sona) address delivered last week, Maimane criticised the president's approach to the fourth industrial revolution, saying that giving school pupils tablets was not helpful.

"Today we have floods in KZN and droughts in the Western Cape. This is the future we must plan for, and so before we build smart cities, we should build sustainable cities.

"Elsewhere in the world countries are using smart technology to keep their people healthy and safe. Solutions like smartphone screening to detect cervical cancer. This should be part of our plan too.

On June 25 2019 Julius Malema attended and spoke at a joint sitting, the topic was a debate on the President's State of the nation Address. Malema touched on various issues including land reform.

Ramaphosa's Sona has been lambasted as being long on dreams and short on concrete plans to resolve the country's socioeconomic problems.

Speaking in the same debate, former ANC chief whip and new minister in the presidency Jackson Mthembu hit back at Maimane.

"Those who claim that the Sona is all about dreams do not understand that all major revolutions worldwide begin with an idea. A people without dreams, without vision and purpose, is a people with no future.

"It was the dreamers who gathered in Mangaung in 1912, and formed an organisation that would wage a resistance struggle against colonialism and oppression informed by the dream of a free SA which now all of us enjoy.

"In this epoch in SA, we are fortunate to have a great visionary in the calibre of President Ramaphosa as the head of state. He is a big dreamer and a big doer at the same time.

"The new smart city that the president talked about is our collective dream. It will be followed by decisive action, wherein we invite young innovative minds who are ICT-savvy to share their ideas on the design and architecture of such a future smart city.

"It is our fervent view that such a smart city must be located in one of our rural provinces so as to disrupt the colonial and apartheid spatial patterns."

Depressed about Cyril’s Sona? Well, SA could have it a lot worse

One always has to hope, of course.
Ideas
3 years ago

South Africans continue to weigh in on President Cyril Ramaphosa's Sona address, with some slamming his plan to deal with unemployment and others ...
Politics
3 years ago

From HIV and poverty to tourism and supporting local: five key points from Sona

President Cyril Ramaphosa said government would bail out Eskom as the utility is fundamental to the economy.
News
3 years ago