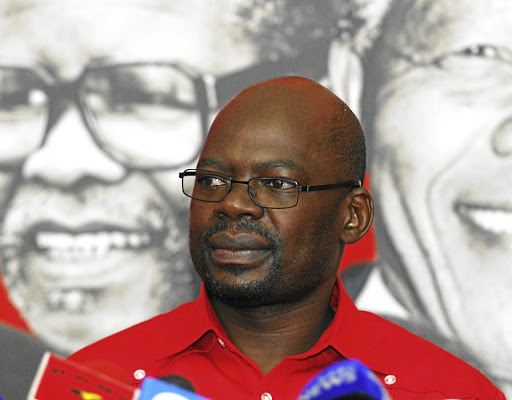 SACP deputy general secretary Solly Mapaila says it would be a tragedy if decolonisation meant defending the corrupt African leaders and officials who have been complicit in looting in their respective countries.
Image: Puxley Makgatho

Mapaila was addressing the national congress of the South African Democratic Teachers' Union (Sadtu) in Nasrec, Johannesburg, on Thursday.

He said it was high time that Sadtu led from the front to "end the patriarchal approach to education we see in our schools".

He called out the "unspoken reservation" of foundation phase teaching jobs for female teachers while men are positioned to teach at the senior level.

"There has been the dominant belief that female teachers are suitable for classes at early childhood development level such as crèche, grade R, grades 1 to 3, and males are more capable of taking the more 'serious' levels where learners must grapple with more complex theories and subjects," said Mapaila.

"This reinforces the stereotype that women, and only women, are best for raising and nurturing children, while males are best placed to deal with the more 'serious' aspects of education and life generally.

"This stratification and gender conditioning lead to noticeably more male principals, which contradicts the ideals of transformation in the education sector; and this, additionally, leads to a more patriarchal approach towards the constitution of school governing bodies."

Mapaila also called for security checks at schools to curb the scourge of drugs.

However, Mapaila said this should be an interim measure while a long-lasting solution was found.

Said Mapaila: "The spread of drugs in schools is another violent societal problem that must be curbed. The solution must involve learners, teachers, school governing bodies, families and general members of the community and society at large, as well as, of course, the government and other state organs, including law enforcement authorities.

"Often the focus is limited to those who sell drugs on the streets or secretly in their houses and shops while the big fish – the kingpins – go scot-free. The multimillionaires and billionaires who manufacture drugs often partner with state officials gone rogue."

Mapaila advised the Sadtu gathering to highlight the need for the decolonisation of education.

This, he said, was critical in the battle of ideas, particularly in the struggle to end "control by imperialists".

But the decolonisation, Mapaila continued, should not be used to shield corrupt African leaders who use white people as scapegoats.

"Whatever the meaning that dominates the notion of decolonisation, it would be a tragedy, however, if it referred to decolonisation without uprooting the prevailing mode of capitalist production that was colonially, bloodily, violently imposed.

"It would also be a tragedy if by decolonisation it is meant defending the corrupt African leaders and officials who have been complicit in looting in their respective countries.

"It is exactly such tendencies which have impoverished Africans while being told by their leaders that at least they were supporting a black leader and not a white one."

The SA Democratic Teachers Union (Sadtu) in KZN wants security guards in schools to be provided with metal detectors and panic buttons.
News
2 years ago

Newly-appointed KwaZulu-Natal education MEC Kwazi Mshengu called on teachers  to attend class on time and warned that there should be no bonuses if ...
Politics
2 years ago

A year-and-a-half after applying for its banking licence, the South African Democratic Teachers’ Union (Sadtu) has successfully launched a ...
News
2 years ago