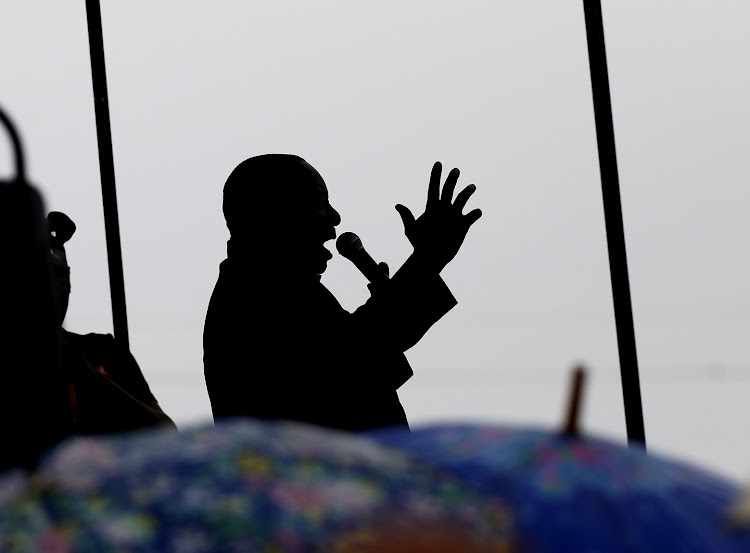 President Cyril Ramaphosa addresses residents of Pampierstad in the Northern Cape during his door-to-door walk about ahead of the ANC 108th birthday celebrations.
Image: Masi Losi

President Cyril Ramaphosa demanded answers from officials at the Phokwane municipality in Pampierstad in the Northern Cape over why the sewerage system could not be fixed.

Residents from the Sakhile area complained to Ramaphosa that pipes in the area could not contain the sewerage, which then filled their houses.

The president grilled engineer Tumelo Thage from the Municipal Infrastructure Support Agent (Misa), who had been seconded to the municipality.

“You can’t have sewerage that is causing so much distress to the community. It is only 2km and all you need to do is increase the pipe. Engineer, please,” Ramaphosa said.

#ANCNC2020 President Cyril Ramaphosa has called on officials from the Phokwane municipality To fix the Sewrsge system. Residents from Sakhile in Pampierstad in the Northern Cape complained that sewerage was filling their homes causing distress. pic.twitter.com/uRRZTOkDP3

Thage explained the area needed 2km of new pipes to end the problem.

“Why doesn’t it get done? Can’t it be done from the Misa fund?” Ramaphosa asked.

The president was visiting the area in the run-up to the ANC’s January 8 rally in Kimberley on Saturday.

Thage said of the R26m allocated to the municipality from Misa, there was not enough to build the pipeline, which is estimated to cost R16m.

“Why can't you in one year use all of it [the grant]? Why can't we do it vasbyt? You do it one time,” Ramaphosa said.

The president said perhaps the provincial government and national government needed to intervene in what he said was an easily solvable problem.

Northern Cape premier Zamani Saul said people would “rather not have a toilet than a toilet that messes”.

The administrator of the municipality, Bambi Ndwandwe, said there had been no budget to upgrade pipes in the area.

He said the sewerage system was built in 1971 and cannot take the current demand.

Thage said they will have to prioritise this project and hope for funding to follow.

Residents of Sakhile were hopeful that Ramaphosa’s visit would bring some change to their lives.

“It’s got to be put right,” Ramaphosa pleaded with the officials.

Healthcare flatlines but all the ANC does is play politics

Sometimes you have to wonder what planet some of our ministers are living on.
Ideas
1 year ago