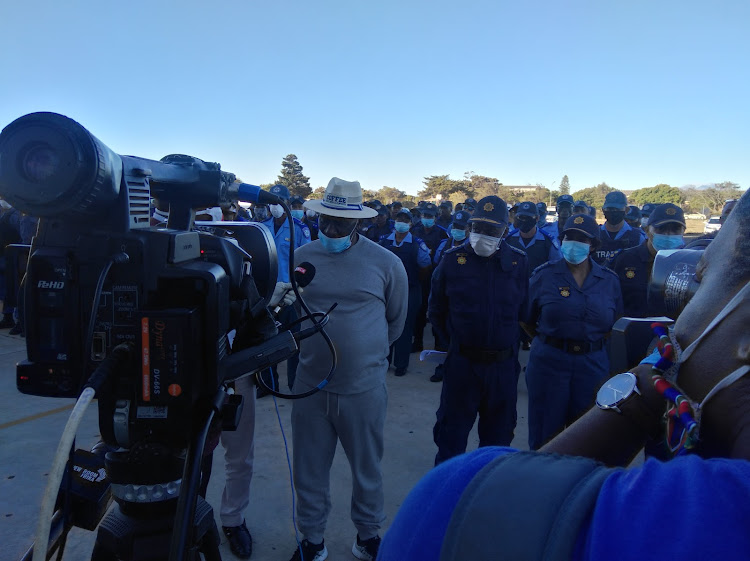 Police Minister Bheki Cele concurrently dangled an olive branch and brandished the big stick as he urged (or ordered) South Africans to stay indoors at the weekend.

The switch between the olive branch and the big stick was distinguished by a change in his tone.

Cele’s voice boomed when he condemned those who are not “complying” with the “commander-in-chief’s” (President Cyril Ramaphosa) order. He vowed that police would “nudge them to obey the law”.

There was a marked difference in tone when he spoke about the havoc wreaked by the corona pandemic in other countries.

Cele addressed a police and an army contingent in Cape Town on Saturday about a wide range of issues pertaining to the national 21- day lockdown aimed at preventing the spread of the virus.

The national lockdown began at midnight on Thursday March 26 2020. South Africans were ordered to stay at home by President Cyril Ramaphosa, yet hundreds of people still roamed the streets of Cape Town’s CBD on Friday. We took a look at how law enforcement is attempting to enforce the president's orders and spoke to some of the people on the streets. 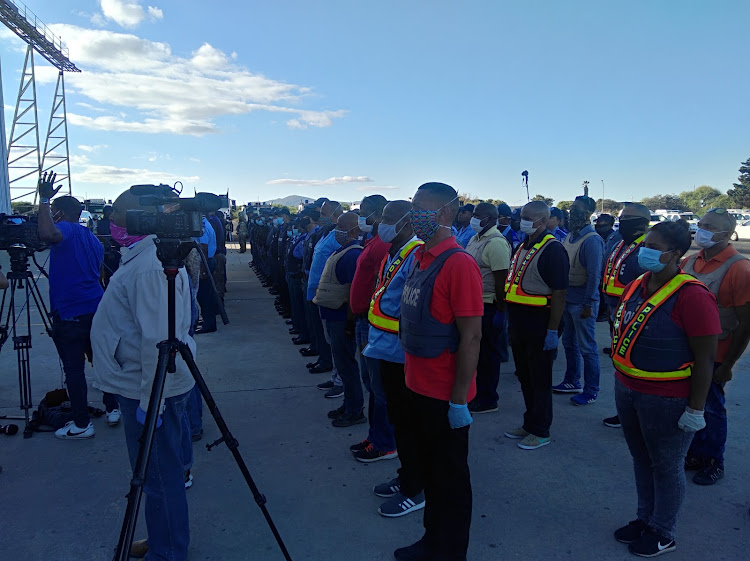 A police and an army contingent paraded in Cape Town on Saturday before heading out to enforce the lockdown regulations.
Image: Philani Nombembe

Among the issues Cele emphasised are that no more than 50 people are allowed to attend a funeral, taxis can only carry 50% of their capacity, people cannot buy “cooked food” and “alcohol” from shops and dog walking is not permitted.

He said some supermarkets were moving alcohol from the spirits section to general grocery divisions.

“It looks like some South Africans have not begun to take the situation seriously,” said Cele.

“The number (of infections) has gone beyond 1,000, and the person has died in this city, which means it is not a joke.

“There was a theory this disease kills old people. It kills people, not a (particular) kind of people. There are basic things you must do. There is no cure for this thing, not even a vaccine.”

Cele said all that South Africans have in their arsenal in the war against the virus are the preventative measures.

“One of the things they are supposed to do is stay in their houses. Stay there, wash your hands, maintain social distance and anything social like hugging and kissing is not part of this. You wash hands, dry hands, you sanitise, you cough in style, you sneeze in style. When you sneeze, you throw away your tissue,” he said. 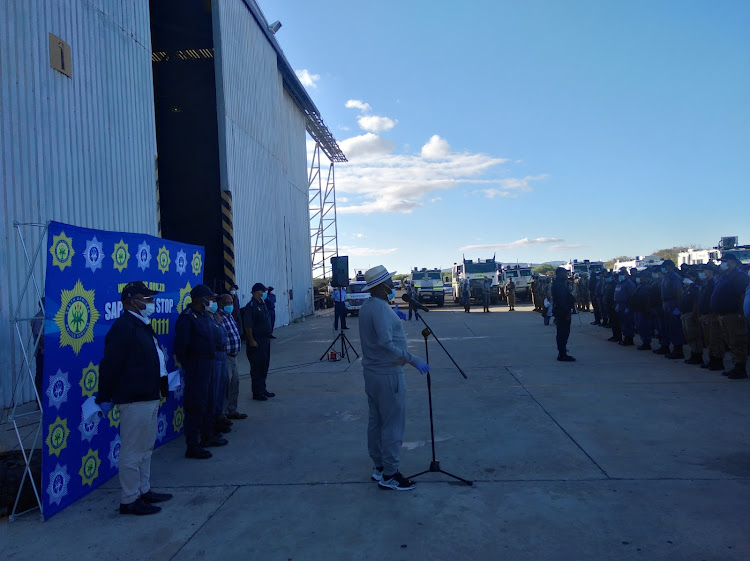 Police minister Bheki Cele had strong words for people who defy the lockdown aimed at curbing the spread of the coronavirus.
Image: Philani Nombembe

With SA under a nationwide lockdown, in a bid to combat the spread of the novel coronavirus pandemic, streets and busy spots in Cape Town and Johannesburg are emptying. The bustle of life at iconic SA places is now a mere shadow of what it was. We take a comparative look at these places before and after the country's national lockdown was implemented.

“You have to read all the dos and all the don’ts. It’s the don’ts I like the most. Don’t go to cinemas, don’t go to beaches, don’t go to theatres and restaurants. You don’t buy alcohol. Nobody is selling it, nobody buys it. You are not allowed to carry it. You can’t take it from my house to your house. Any alcohol that is in transit is a criminal act.”

Cele told police officers there should be no joggers and dog walkers on the streets.

Western Cape premier Alan Winde has, again, urged residents to stay at home after an increase in the number of coronavirus infections in the province.
News
2 years ago

He said the number of people who can attend a funeral has been drastically reduced.

“Funerals are permitted to be attended by 50 people. People go to police stations and are granted permission, which is then causing problems for roadblocks. The permission you are granted is for the people who are walking the body,” Cele said.

“It is painful, it is something  all of us don’t know. If you die now you will be buried by 10 people. This is not a time to die. There are laws here.”

Cele said the aim of the lockdown operation is to prevent a catastrophe.

“The crux of the matter is that we are trying to prevent a disaster. If you deny  this can be catastrophic, just look around Europe. Last Tuesday, in Italy they picked up 627 bodies in 24 hours. In the last 24 hours, they picked up 1,000 bodies dead, dead!,” he said.

On March 26 2020, is the start of a new period of uncertainty as South Africans adapt to life under a nationwide lockdown in the wake of the Covid-19 pandemic. Here are some of the answers to your 'leaving home' questions.

“Spain is leading, coming after Italy now. If you thought that is not an African phenomenon, it has begun to kill people here at home, and here in this city. It kills.”

He urged the officers, wearing masks and gloves, to apply the laws during their interactions.

“Listen to the commander-in-chief (Ramaphosa). He has sent all of us to go and protect, to go and make sure we work with all the people of SA. He has reminded us there is no ‘skop' and 'donner’, but he said those who don’t want to listen, we will have to push and nudge them towards obeying the laws,” Cele said.

“ We know what it is to nudge. He said ‘nudge them towards keeping the law’. We are calling on South Africans to obey the law. If they are not, we will make them do so. We will nudge them. It is for the best of the people of SA.”

While the “no dog walking or jogging” rule still had tongues wagging on Sunday, police moved to clarify whether owners or tenants living in ...
News
2 years ago

Minibus taxis will be allowed to operate from 5am to 8pm