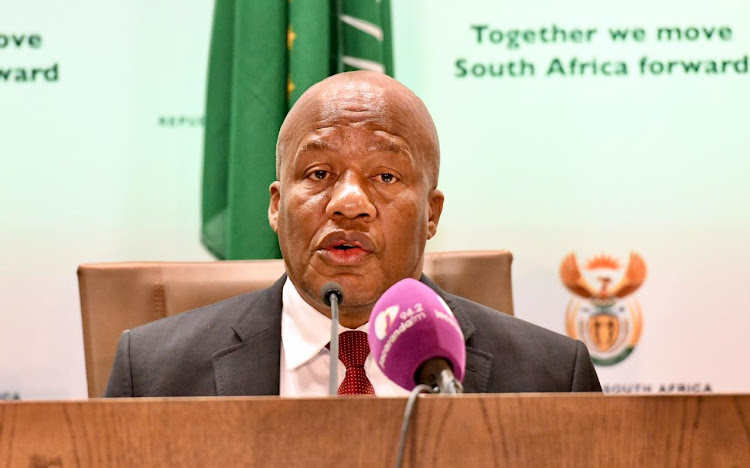 On Thursday, President Cyril Ramaphosa announced that Mthembu, the minister in the presidency, had succumbed to Covid-19 related complications.

Mthembu's life was nothing short of hard-fought and his allegiance in the fight against the apartheid regime was evident.

It is with deep sorrow and shock that we announce that Minister in the Presidency Jackson Mthembu passed away earlier today from COVID-related complications.

Our thoughts and prayers are with his family at this time of loss.

According to South African History Online, Mthembu had his humble beginnings in Witbank. Raised by his grandmother, Sarah Mthembu, and his uncles, he grew up in Kromkrans, a reserve for black people between Hendrina and Carolina in the then Transvaal.

Aged seven, Mthembu was subjected to hard labour, working in the mealie fields with his grandmother to support their family.

During the 1976 Soweto uprising, Mthembu was a student leader at Elukhanyisweni Secondary School in Witbank. On many occasions while at school he was “chucked out for not being able to afford school fees, uniforms [and] books”.

He attended the University of Fort Hare but was later expelled, and started working at Highveld Steel as a training officer from 1980 to 1984, and as production foreman from 1986 to 1988.

Mthembu became heavily involved in the Met­al and Allied Workers' Union (Mawu) during his time at Highveld Steel, earning him a position of senior steward between 1984 and 1986. He was also chair of the Witbank Educa­tion Crisis Committee from 1980 to 1986.

According to the presidency, Mthembu had his fair share of run-ins with the law during the dark years of the 1980s. The states of emergency saw him in and out of prison, being charged with trea­son - and acquitted - between 1986 and 1988.

“He was charged with sabotage, treason and terrorism between 1986 and 1988, and tried together with 30 other activists from Witbank,” the presidency said in its profile on him.

The trial came to be known as the Bethal terrorism trial, and Mthembu was acquitted.

After this acquittal, the apartheid security police continued their harassment and intimidation of Mthembu, which led him to move away from Witbank and to find refuge in Soweto and Alexandra. In making himself an “internal exile”, he seriously disrupted his family life.

His fight against injustice saw him cross borders, leading a support group of more than 300 taxis for the South West Africa People's Organisation (Swapo) to the first democratic elections in Namibia in 1988.

From deputy regional secretary of the United Democratic Front (UDF) from 1988 to 1990, his Roman Catholic and Methodist background saw him go on to become the media officer for the South African Council of Churches (SACC).

It was through his involvement with the SACC, under the leadership of Rev Frank Chikane, that he joined the Swapo solidarity campaign and led the support group to what is now Namibia.

Swapo won the elections, which led to the liberation of the country.

Mthembu's career with the ANC began with the unbanning of political parties in 1990. He was entrusted with the responsibility of leading the Witbank branch of the party.

Between 1990 and 1994 he worked full-time as ANC spokesperson in Mpumalanga and participated in the Convention for a Democratic South African (Codesa) negotiations.

After the first democratic elections in 1994, he was part of the first ANC members of parliament contingent deployed in what is now the National Council of Provinces, where he contributed to the crafting of SA's constitution.

He was later appointed as Mpumalanga public works, roads and transport MEC.

He was the national spokesperson of the ANC under President Nelson Mandela from 1995 to 1997, and was appointed to the same role again from 2009 to 2014.

While based at Luthuli House, one of the structures he chaired was the ANC Caster Semenya Support Committee, which included Winnie Madikizela-Mandela. The responsibility of this committee was to give practical support to Semenya against the "inhumane treatment, abuse and discrimination" she was subjected to by the International Association of Athletics Federation.

Mthembu served as the chief whip of the ANC in the National Assembly from 2016 up to the end of the fifth term of parliament in 2019.

After the 2019 national and general elections, he was appointed as the minister in the presidency under Ramaphosa.

Despite his activism, Mthembu's life was also at times marked by controversy.

During his tenure as transport MEC in Mpumalanga, he was criticised for spending R2.3m on 10 BMWs.

In November 2017, Mthembu was criticised by some of his ANC colleagues who said he intentionally “colluded” with the DA to schedule a debate on state capture in parliament. A long-time ally of the Ramaphosa faction, Mthembu was seen to have deliberately defied former president Jacob Zuma and his own colleagues in the ANC caucus who had called for a more inclusive process to investigate state capture.

He was married to Thembi Mthembu, and was father to two daughters and four sons.

Mthembu's life took a turn for the worse in March 2019, when his eldest daughter, whom he shared with his late wife Pinkie, Khwezi Mthembu, committed suicide at the age of 25.

At her funeral, Mthembu told about 3,000 mourners about how he found his daughter hanging from the curtain rails after committing suicide. He said at the time that nothing could compare to the pain of walking into a room and seeing the lifeless body of one’s child.

“If you raise a child who finishes school and starts working, you say, 'I have done my bit. There is someone who is going to bury me when I die.' Not knowing that she is the first who is going to go in a painful and surprising way. We have lost. We expected a lot from Khwezi,” he said.

Minister in the presidency Jackson Mthembu is in self-quarantine after testing positive for Covid-19 on Monday.
Politics
1 year ago

Jackson Mthembu has tested positive for Covid-19, he confirmed on Monday.
Politics
1 year ago