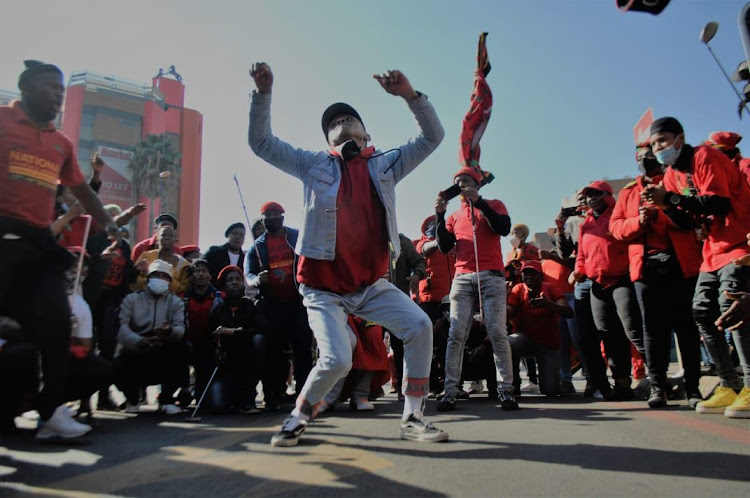 Hundreds of EFF supporters and red berets leader Julius Malema descended on Pretoria — in apparent violation of lockdown regulations on gatherings and safety protocols — to “march to save lives” and demand approval of the Chinese and Russian Covid-19 vaccines for use in SA.

They gathered outside the offices of the SA Health Products Regulatory Authority (Sahpra), which is the body tasked with regulating health products in SA. Some wore face masks, some masks dangled on chins and others did not wear masks at all.

Provincial police spokesperson Col Brenda Muridili said the police would draft a report after the march to determine what charges would be instituted against the convener as the number of people gathered breached lockdown restrictions. 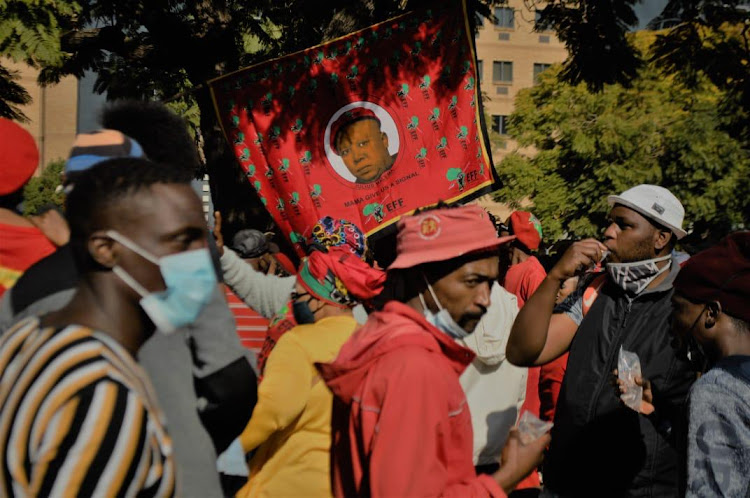 While some wore face masks at the protest, others did not.
Image: Ziphozonke Lushaba

Malema demanded that Sahpra respond to their appeal for vaccinations within seven days or face a sit-in at the home of its CEO.

“We want more vaccines available. They are telling us this event is a super-spreader but it is not true because we are meeting here outdoors for few minutes. From there we are going home and we comply with Covid-19 regulations.

“Schools are on as we speak. Our schools have more children than this march.”

Malema said if President Cyril Ramaphosa continued to announce further lockdowns, the EFF would not comply.

“We are not going to entertain lockdowns. Our agenda is simple: give our people vaccines. We want to open the economy, we want our artists to perform. Lockdown is not a solution. We are no longer going to entertain any lockdown,” he said.

EFF has heard the cries of our people. Our people want vaccines. #MarchToSaveLives pic.twitter.com/nEQw0Iz8OS

Malema said the only language they would listen to is that of the provision of vaccines.

EFF deputy president Floyd Shivambu, reading out the memorandum handed to Sahpra, said it was evident government was dismally failing to provide vaccines. He said this was because of Sahpra’s refusal to authorise the use of the Russian and Chinese manufactured vaccines.

“We come here carrying the burden of the millions of the economically excluded, subjugated, oppressed, exploited and depressed South Africans in the ‘Save Lives mass action’ under the leader of the EFF,” Shivambu said.

Among their list of demands was that Sahpra expedite the approval of all scientifically tested and proven vaccines for massive roll out in SA, and they want the Sputnik V and Sinovac vaccines approved within seven days.

“These vaccines are administered in more than 60 countries all over the world and have never had negative consequences,” he said.

The party further demands the removal of Helen Rees as Sahpra board chair.

“We make these demands because we believe it is only through mass vaccinations that SA will be able to reopen the economy and many activities to proceed as normal. Lockdown regulations and restrictions are not solutions to the Covid-19 pandemic but a measure to contain the rapid spread,” he said.

EFF spokesperson Vuyani Pambo said they had declared war and would make sure they got the vaccines.

“Fools will ask us why we are coming out when there are high infections. The infections are affecting us from home. We are standing up. This is a war and we have declared it as one and we are acting as people who are in the war.

“We are dying in numbers. We are tired of seeing our loved ones die like flies,” he said. 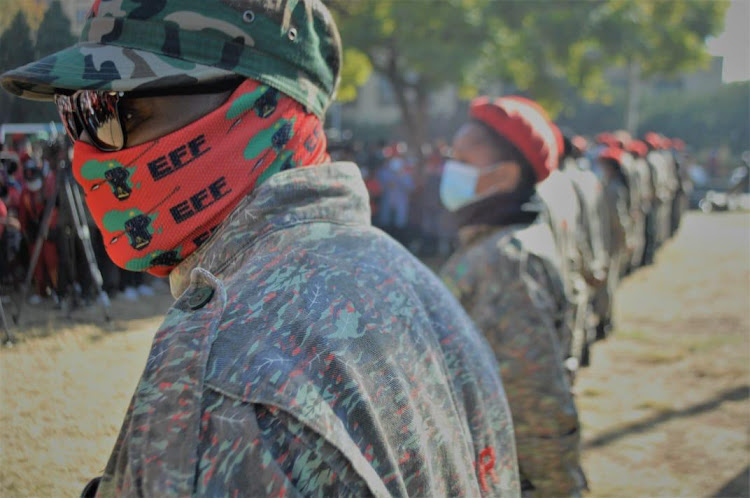 Pambo said the government had been given enough time to respond to the pandemic.

“We cannot go on with lockdowns. We have to respond with vaccines. There were no vaccines when we went into the first lockdown. There are vaccines now. Why do you want to shut us down, why do you want to imprison us in our homes? We will not be committed to the grave early by this government,” he said.

Rapper Riky Rick was also present at the march to pledge solidarity, saying many artists had been badly affected by Covid-19.

“We are here to bring support to the vaccine issue. We have been waiting for long to open up the economy. We are asking for vaccines,” he said.

'Police will be there at every point watching over the marchers': SAPS ready for EFF's vaccine march

The SA Police Service will on Friday deploy officers to the EFF's march to the SA Health Products Regulatory Authority (Sahpra) headquarters to ...
News
10 months ago

Sahpra's CEO said pharmaceutical companies looking to supply vaccines to SA must provide evidence of their effectiveness against the 501Y.V2 ...
News
10 months ago

Chinese, Russian vaccines almost in SA, but don’t get too excited

The virus used in making the Sputnik vaccine, for instance, could pose a risk to uncircumcised men living with HIV
News
11 months ago